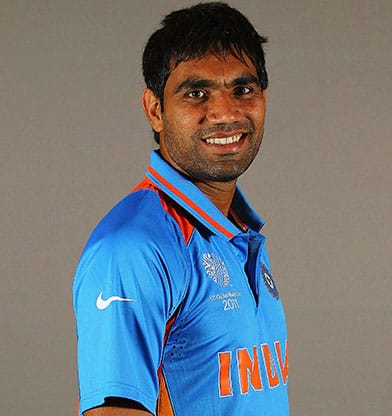 There was a lot of talk about Munaf Patel years before he donned the India colours. It was said that a young boy from Ikhar, a small village in Gujarat, could bowl at a serious pace, which had lifted India’s hopes for a genuine fast bowler.

When he made his Test debut against England at Mohali in 2006, snaring seven wickets in an Indian win, the country felt they had found its fast bowler. Yet, Munaf was in and out of the side owing to fitness issues, not helped by some poor fielding skills (and non-batsmanship). He also cut down on his pace over the years, relying more on accuracy and movement than on pace.

In his new avatar, Munaf was more accurate and caused problems for batsmen in ODIs. In Tests, he was not as effective and he became more of a one-day bowler. During the 2011 World Cup, Munaf played a crucial role, supporting Zaheer Khan to take India to a memorable triumph.

In the months after the World Cup, he became India’s frontline fast bowler in ODIs and led the attack in the Caribbean and England. A terrible ankle injury during the last game of the tour to England halted his career and he hasn’t been able to comeback since. He played for the Mumbai Indians from 2011 to 2013 but has not been picked by a team after that.

Though Munaf did not fulfil all expectations, he remains an inspiration to many with his remarkable story from obscurity to the top echelons of the game.