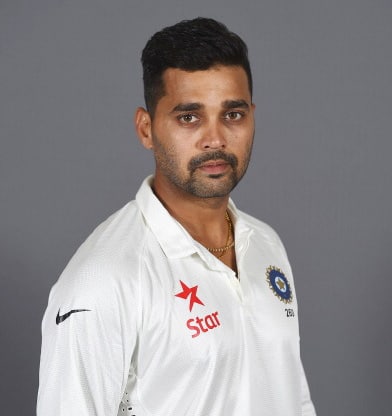 India could not have got a better replacement in one of the opening slots than Murali Vijay, when they went into rebuilding phase in 2012-13 following the exits of several greats. Ever since Vijay has returned to the national side, he has emerged as one of the most improved batsmen in the Test arena. His feats are not limited to Test cricket, as Vijay, famously nicknamed ‘Monk’, has dominated bowlers in IPL as well with two centuries.

The call-up for national side came after he partnered Abhinav Mukund for a mammoth 462-run stand. Vijay made his Test debut against Australia at Nagpur in 2008, impressing with resolute knocks of 33 and 41. In his third Test innings he notched up a strokeful 87 against Sri Lanka, but the wait for the Test century was somewhat long: it came as late as in October 2010 when he struck 139 against Australia.

Unfortunately, Vijay went into a slump, and a string of failures in South Africa and West Indies resulted in his axing. But when India needed an opener who promised application, discipline and stability more than anything, Vijay was recalled. He resumed with 10 and 6 in Border-Gavaskar Trophy 2013-14.

The second Test saw Vijay fulfilling the promise — he tallied 167 — and India won by an innings and 135 runs. Vijay followed it up with yet another big score of 153 at Mohali, a match remembered for Shikhar Dhawan’s exploits. The series saw India hammer Australia 4-0 for the first time, and Vijay finishing with 430 runs at 61.42, hitting 2 centuries and a half-century.

Vijay had an ordinary run against West Indies at home in 2013-14, Sachin Tendulkar’s last. In the second Test at Mumbai, Vijay would have felt like batting in enemy territory as the whole of Wankhede was cheering for India’s second wicket to fall so that they can get to see the Little Master bat.
Tendulkar’s exit marked the beginning of a very tough year for India, as tours to South Africa, New Zealand, England and Australia beckoned. India won only 1 Test — against England at Lord’s — but they found many gems that would take care of the batting department and one of them was Vijay.

Vijay scored 39 off 94 at Johannesburg, setting strong example for his peers. At Durban, he gave full
respect to South African pacers and dropped the anchor, scoring 97 off 226. The two innings sufficed Indian cricket fans’ worries, compelling them to start believing in him.

A poor, short tour of New Zealand was followed by a terrific start at Trent Bridge against England in July 2014. A big century — 146 off 361 — certified Vijay’s abilities with bat in one of the most testing conditions. He followed this with 52 in the second innings, and at Lord’s he missed out by 5 runs on what could have been a memorable century. But in a long 5-Test series, both India and Vijay fizzled out after the third Test.

The tour to Australia in 2014-15 saw Vijay scaling bigger heights. He began with 53 and 99 at Adelaide, and struck a magnificent 144 at Brisbane. There were two more half-centuries — 68 at Melbourne and 80 at Sydney — and finished the series as the third-highest scorer. Vijay made 482 against Australia in their backyard — more than what he managed against them back home a year ago.

Vijay’s ability to switch between formats with ease, his appetite for big knocks and his application and discipline have made him the best choice for opening slot. He has played limited-overs cricket as well — the Zimbabwe tour of 2015 for ODIs and T20Is being his last appearance — but Test cricket is where Vijay truly belongs.