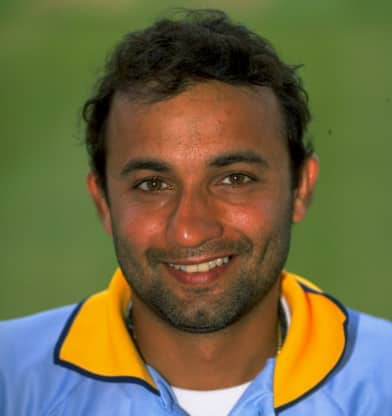 Armed with outstanding footwork and very soft hands, Nayan Mongia assumed the unenviable responsibility of keeping wickets to Anil Kumble on unpredictable pitches. He came out with flying colours, performing as brilliantly as anyone in the history of Indian cricket.
The infectious smile was as typical of Mongia as the trademark ai-shabash-shabash-shabash or ai-gaa, words emulated by all budding wicketkeepers in the country in the 1990s. He was a character if there was one.
He finished with 107 dismissals. In the Durban Test of 1996-97 he held 8 catches, setting a new Indian record. He equalled that at Eden Gardens in 1998-99. Only MS Dhoni has managed to emulate the feat.
What made Mongia’s rise even more unbelievable was the fact that he played for Baroda, the same side as Kiran More. Mongia played for Baroda only when More was away on national duty; and yet, when Mongia made it to the national team, it was at the expense of More; he was good enough to impress the selectors despite being the second wicketkeeper of a state side; perhaps those words of praise from Alan Knott influenced the selectors.
He was also competent with bat, battling it out under tough circumstances. He reached double-figures in each of his first 6 innings; played at least two back-to-the-wall innings against Curtly Ambrose, Courtney Walsh, and Ian Bishop in 1997; top-scored with a 147-ball 80 at Mumbai to set up a win against West Indies in 1994-95; and supported Sachin Tendulkar with 52 (before throwing it away carelessly) in the famous chase at Chennai in 1999-00.
However, his magnum opus came in 1996 at Delhi. After Australia were bowled out for 182, Mongia opened batting and gritted it out for over eight hours to carve out 152, his only Test hundred.
He also had his fair share of controversies: he was banned for an ODI for excessive appealing. He and Manoj Prabhakar inexplicably refused to go after 63 in 54 balls in an ODI; both were dropped immediately. He was also suspended following match-fixing allegations.
He returned to finish his international career with the iconic Kolkata Test of 2000-01. One of the earliest men to don the helmet while keeping wickets, Mongia batted in an obnoxious yellow helmet towards the end of his career.
In all Mongia scored 7,736 First-Class runs at 38 and had 396 dismissals to his name. He later coached Thailand and appeared as an expert on television channels.
Abhishek Mukherjee