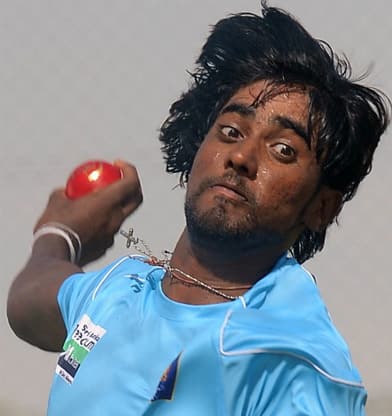 Nuwan Pradeep had come into the limelight from nowhere. Actually, it was in a softball competition in 2007 that he impressed good judges of the game with his extra burst of pace and soon came into the reckoning. In fact, unlit then he hadn’t even bowled with a leather ball.

When Lasith Malinga had a stiff knee while playing against India in a Test match at Colombo in 2010, Pradeep was drafted into the setup. He didn’t play in that series though. It was only during Sri Lanka’s tour of UAE to play Pakistan in 2011 did he make his Test debut at Abu Dhabi.

However, Pradeep has found success hard to come by in Tests. He did show glimpses of what is capable of by taking five wickets against Pakistan at Dubai in 2014, which eventually helped Sri Lanka win the Test.

With his round-arm action, Pradeep is skiddy through the air but can be erratic. In his defence, it has to be said that most of the Tests Pradeep has played have been on unresponsive tracks for pacers.