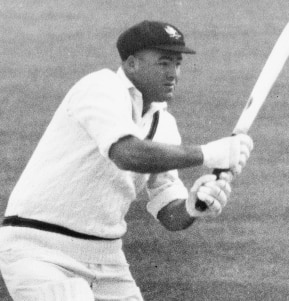 A big, strong, aggressive middle-order batsman, Peter Burge took on Fred Trueman and Brian Statham without fear in the 1960s. He could hit the ball extremely hard, and was particularly strong off back-foot. He hooked and cut with panache, and the faster they bowled, the harder he hit.
Burge scored 2,290 Test runs at 38 and 14,640 First-Class runs at 48. Unfortunately, he never got a long run, and his 42 Tests came across 16 series. He played 22 Ashes Tests, and scored a hundred in four separate Ashes series.
Australia needed a mere 71 in the Lord’s Test of 1961, but Trueman and Statham reduced them to 19 for 4. Burge walked out with the instructions to “beat the hell out of them”. He duly obliged, and Australia won comfortably. In the last Test of the series he accumulated 181 at The Oval.
Then, at Sydney in the 1962-63 Ashes he top-scored in each innings with 103 and 52*. And in 1964 at Headingley he lifted Australia from 178 for 7 to 389, scoring 160; Wisden referred to the latter as “Burge’s match”.
In domestic cricket his highest score came in 1963-64, against New South Wales: he amassed 283 before he was run out. It remained the highest score for a Queenslander for four decades. He scored 205* and 129 in the next two innings.
All this happened after he was forced to become a batsman: a wicketkeeper in his early days, Burge found it impossible to break it to the Queensland side, where Don Tallon was first-choice ’keeper and Wally Grout the number two.
Cricket ran in the family. Peter’s great-great-grandfather John had played against the Australians for Darling Downs, while Peter’s father Jack played Grade Cricket in Brisbane and managed the Australian Test side. It was no surprise that Peter would pick up his first bat at three and would earn the reputation of a child prodigy by five.
In 1992 Burge was appointed an ICC match referee. The following year he became the first match referee to suspend an international cricketer (Aaqib Javed) for abusing an umpire.
He officiated in 25 Tests and 63 ODIs, of which the most controversial moment came when he was not allowed to penalise Michael Atherton for ball-tampering: ECB took the matter in their own hands and fined Atherton £2,000. The matters were “snatched from his hands”, commented Wisden.
QCA started the Peter Burge Medal since 1990-91 for the “best and fairest” First-Grade cricketer. He was honoured with the AM in 1997 for his “service to cricket as a player, administrator, and international referee, and to harness racing.”
Burge passed away in 2001, at 69, eight months after his final match as referee.
Abhishek Mukherjee