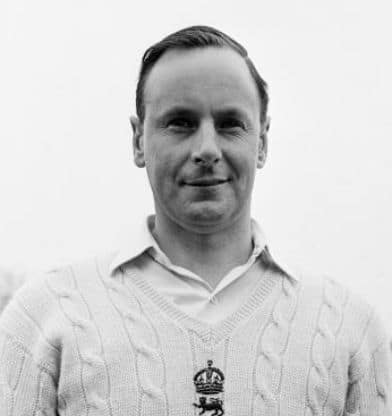 Tall and handsome, with a classical batting style, Peter May was the hero to a generation of schoolboys. For much of the 1950s he was the personification of ideal cricketer.

Between 1952 and 1958, Surrey won every County championship, and England did not lose a single series. May got used to winning, and this was the mental makeup he inherited as he moved into the positions of leadership of county and country.

May became the captain of England in 1955 when Len Hutton fell ill. He continued to lead England in a record 41 Tests, unquestioned and unchallenged as the supreme authority of English cricket on the field. Under his leadership, aided by his able Surrey hands Jim Laker and Tony Lock, England won 20 Tests and lost only 10. The triumph over Australia in the summer of 1956 was a combined result of Laker’s magic assisted by commanding captaincy and a very strong team.

May’s batsmanship also reached its peak as he rose from strength to strength as captain. The very same pitches on which Laker and Lock reigned supreme and the oppositions had very little respite saw him pile on runs.

Perhaps the pinnacle of his powers was witnessed when at Edgbaston in 1957, against Sonny Ramadhin on rampage, he used his pads to frustrate the mystery spinner into submission. May scored 285, his greatest innings, and added 411 with Colin Cowdrey. The Test, the first one which was aired through ball-by-ball broadcast, was saved from a precarious position and England went on to win the series 3-0.

The next season, 1958, witnessed the most miserable conditions for batting during the wet summer. May averaged almost 64 in the county championships, 17 more than any other man. That summer New Zealand visited and were trounced 4-0. May managed 337 runs averaging in the high sixties.

However, when England visited Australia in 1958-59, they lost by an equal margin. It was not a happy tour for May. There were controversies about the action of several of the Australian bowlers. He also ran into several tiffs with Laker. The captain was also hounded by the media because of the presence of his fiancée Virginia, daughter of former England captain Harold Gilligan.

After intermittent injuries, he returned in 1961 and led England to win over Australia at Headingley. However, in the following Test at Old Trafford, he was bowled by Richie Benaud round the legs off the second ball he faced and England lost a thriller. Although he had scored 95 in the first innings, the dismissal that remained fresh in mind. May retired after the drawn final Test at The Oval.

He retired from First-class cricket in 1962, but Wisden, alongwith the rest of the country, hoped for a comeback. They published a final tribute only in 1971.

After his playing days, May worked as an insurance broker and an underwriter at Lloyd’s. In the 1980s he became a high-profile but unsuccessful Chairman of Selectors for England, and his reign ended in disarray in 1988 with the summer of four captains.

His collection of 4,537 Test runs at 46.77 with 13 centuries from 66 Tests marks him as one of the greatest post-War batsmen of England, the last in the line of great amateurs. His runs assume even more weight when we consider that the period when he played witnessed some of the most bowler-friendly conditions since the First World War.

News ON Peter May

More News on Peter May

Features ON Peter May

More Features on Peter May