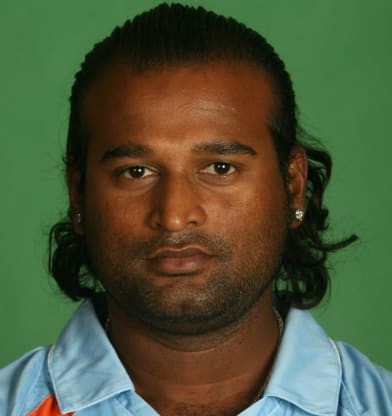 In an era when the doosra and the carrom ball featured compulsory in the arsenal of off-spinners, Ramesh Powar thrived on loop off-breaks and subtle variations in flight and pace, getting the odd delivery to drift away ever so slightly.
Armed with an enviable girth, a perpetually smiling face, and often bright blue shades with red frames, Powar hardly looked like a cricketer. However, the approach changed when the captain tossed the ball at him: he wheeled away, over after over, luring batsmen into making mistakes.
For someone who flighted the ball so much, Powar was exceptionally accurate: he went for a mere 4.65 an over in ODI cricket from 35 matches. He was not as penetrating, for his First-Class numbers read 470 wickets at 31. His rotund physique meant that he was not the most athletic fielder either.
However, Powar could bat. A First-Class batting average of 27 bears testimony to that, as do his 7 hundreds. In four consecutive seasons (from 2000-01 to 2003-04) he averaged over 30 with bat, and in none of his 17 seasons did he average in single-figures.
Powar played a crucial role when Mumbai won the 2002-03 Ranji Trophy: he took 20 wickets at 32 and scored 514 runs at 47. Only Wasim Jaffer had scored more for Mumbai that season.
Indeed, at domestic level he was probably a better batsman than bowler.
India were chasing 318 on his international debut, in an ODI at Rawalpindi at 2004-05. They were 284 for 8 before Powar added 30 with Lakshmipathy Balaji; they fell short in the end.
His other innings of note, a gritty 54, came against England at Jamshedpur in 2006; he walked out at 79 for 5 and helped MS Dhoni put on 107. At Faridabad in the same series he picked up 3 for 34. In a Champions Trophy match later that year he got 3 for 24, once again against England.
However, his finest spell came in a low-scoring match, against West Indies in 2007-08: chasing a mere 190, West Indies collapsed to 169, Powar taking 3 for 42; he gave the ball serious rip, and every single batsman to be dismissed fell prey to his turn and guile.
He went to England later that year, and finished with an economy rate of 4.57 on pitches not conducive to his kind of bowling. Against England his 16 wickets came at 28.81 and an economy rate of 4.30 an over.
He got 2 Tests, taking 6 wickets at under 20, but a Bangladesh tour was not considered special in those days.
After Mumbai he also played for Rajasthan and Gujarat. He also played for Kings XI Punjab and Kochi Tuskers Kerala in IPL. He did not have outstanding stints, but he did enough to inspire a Bangladeshi boy called Mehedi Hasan Miraz, who copied his action and style of bowling before bursting into the international scene in 2016.
His brother Kiran has also played First-Class cricket.
Abhishek Mukherjee