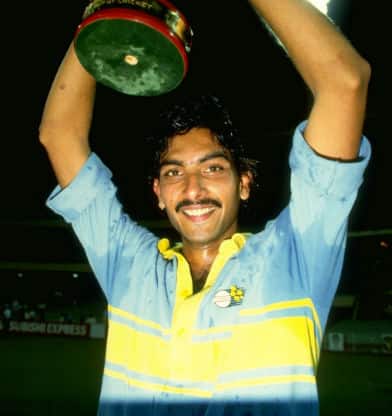 The enigma of Ravi Shastri has been one of the most intriguing ones in Indian cricket. The fact that the second person to hit six sixes in an over in First-Class cricket was one of the dreariest batsmen of his time has confused cricket fans.

Originally picked as a left-arm spinner (almost out of the blue), Shastri made his way up the batting order; he was used as a floater up and down the order, and finished his career as an opener with 11 hundreds, which included a 206 against a strong Australian attack at SCG.

With the ability to bowl long spells, Shastri added balance to the team in the mid-1980s. He was often picked as the fifth bowler, but despite the fact that he did not have very impressive numbers, he remains the one of only seven cricketers to have achieved the 3,000 run-100 wicket double in both Tests and ODIs.

Perhaps remembered the most as the Champion of Champions in the World Series Cup of 1984-85, Shastri was one of the shrewdest brains in Indian cricket. However, Indian captaincy seemed to elude him though he went on to become the vice-captain under several captains. When his turn came he led India to a historic win against West Indies at Chepauk in 1987-88, but he was never asked to lead India again.

Following a premature retirement, Shastri made a seamless transition to television commentary, and had responded to clarion calls during moments of crisis — first as a coach of the Indian team following the World Cup debacle of 2007, followed by his role as the team director for the ODI series in England in 2014 after India’s humiliating defeat in the Test series.