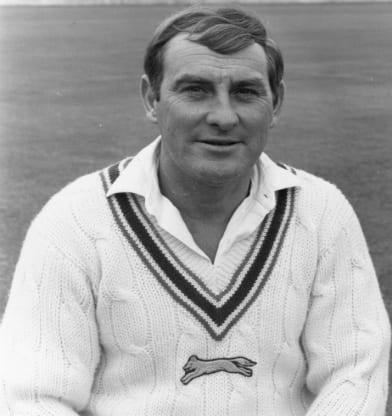 Ray Illingworth was so influential a captain that it is often forgotten how good a cricketer he was. For starters, Illingworth is one of only nine men to have done the 20,000 run-2,000 wicket double in First-Class cricket, and he had done it at batting and bowling averages of 28 and 20 respectively.
His career lasted a phenomenal 32 years. Another significant statistic is the fact that he remained not out in 20% of the innings he batted in (despite not being a tail-ender). This was certainly the outcome of the Yorkshire school of dogged batsmanship. One can actually narrow it down further: like ‘Long John’ Tunnicliffe, Herbert Sutcliffe, and Len Hutton, Illingworth hailed from Pudsey.
At Test level he had to adopt a containing role, for he often bowled in tandem with the lethal Derek Underwood (with whom he shares birthday). So he bowled accurate off-breaks, and finished with an economy rate of 1.91 — the best for anyone to have bowled in 100 Test innings.
Despite all that, he is remembered as the man who took over the mantle of England captain at 37 and led them to 12 wins in 31 Tests. With a 20-Test cut-off, only Mike Brearley and Len Hutton have better win-loss ratios than his 2.4 among English captains.
This overlapped with a streak of 27 undefeated Tests for England from 1968 to 1971 that came to an end when they lost to India at The Oval. Illingworth led them in 19 of these. The record has been bettered only once. He levelled the 1968 Ashes at home, regained the urn Down Under and retained it at home.
In the 1970-71 Ashes Illingworth became the first captain to leave Australia without losing a Test in a series involving 3 or more Tests. He achieved this with a batch they called “Dad’s Army” — for they were a group whose average age was in the thirties.
On that same tour Illingworth led England in the first ever ODI. He took 3 for 50 in a match England lost.
Illingworth was combative, no-nonsense, and result-driven; he never hesitated in locking horns with the authorities (which eventually led him to leave Yorkshire for Leicestershire); he handled volatile men like Geoff Boycott and John Snow; and was a strategist of the highest order.
He also backed his team to the hilt. Never was this more emphasised than the time when Snow was manhandled at Sydney after he felled Terry Jenner. Not only did he lead his team off the ground, he also threatened team manager David Clark (“all hell would break loose”) if anyone did not receive good conduct bonus.
Illingworth was awarded with the CBE in 1973. Two years later he led Leicestershire to the Championship title. He later became manager of Yorkshire, and replaced Chris Old as captain of the county at the age of fifty. He led them to the Sunday League title in 1983. Unfortunately, Yorkshire also finished at the bottom of the Championship table for the first time that season.
He later became a part of the media where he surprised everyone with his ahead-of-times reliance on data.
In 1994 he was appointed England cricket’s supremo (a one-man committee) and Chairman of Selectors. He had fallouts with Michael Atherton, among several others. His tenure ended in 1996.
Illingworth later became an honorary MCC member. He was also inducted into Yorkshire’s Hall of Fame.
Abhishek Mukherjee