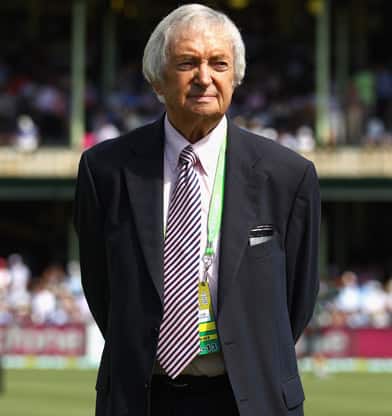 A sophisticated, refined man of French descent, Richie Benaud went on to become a trend-setting all-rounder, a legendary leg-spinner, one of the most successful Australian captains and, subsequently, the undisputed voice of cricket.

As a batsman he was hard-hitting and a well-known exponent of lofted drives; as a fielder one of the best close-in catchers of his era; and as a bowler, the Australian leg-spinning bridge between the glory days of Clarrie Grimmett and Bill O’Reilly and the modern era of Shane Warne.

Neither as talented nor as large a spinner of the ball as the other great Australian exponents of the art, Benaud was a master at exploiting rough patches on the surface and generated disconcerting bounce. He was accurate to the extent of nagging and in his arsenal there lay concealed a well-disguised googly, a fantastic top-spinner, and later a formidable flipper.

He led Australia to 12 Test wins and lost just four — and did not lose a series (and won five!). In an era not known to demonstrate emotion on the field, Benaud stood with an unbuttoned shirt, raised eyebrows and embraced his players when wickets fell. His fearless moves and natural charisma enlivened interest in Test cricket during an era when post-War circumspection and parsimonious approach to batting and bowling had made the game increasingly tedious for spectators.

The peak of his career, as well as the turning point for the game of cricket, was reached in 1960-61, when Frank Worrell’s West Indians arrived in Australia to play the most memorable series of all. The five Tests saw exhilarating cricket, aggressive and attractive captaincy, and spirit that characterised all that the game was about.

Benaud became the first man to complete the double of 2,000 runs and 200 wickets and held the world record for the highest number of wickets in Tests. Yet, his contribution was far from over with his playing days.

The wisdom gathered and dispensed became identifiable with his greying hair. His analytical mind was sought by great cricketers and administrators alike. Shane Warne considered him a mentor, Ian Chappell looked up to him for advice and Kerry Packer approached him for guidance during the World Series Championships.

A journalist since his playing days, Benaud became a sports columnist and got into the BBC commentary box in 1960. He later moved into television. His broadcasting retained the characteristics of his cricket — full of commonsense, direct and to the point. He was undoubtedly the best voice behind the microphone, the voice of cricket. The several books he penned on the game were also full of sparkling insights.

According to Gideon Haigh, “He is perhaps the most influential cricketer and cricket personality since the Second World War.” While reviewing Benaud’s autobiography, Anything But, Sri Lankan cricket writer Harold de Andrado wrote: “Richie Benaud, possibly next to Sir Don Bradman, has been one of the greatest cricketing personalities as player, researcher, writer, critic, author, organiser, adviser and student of the game.“