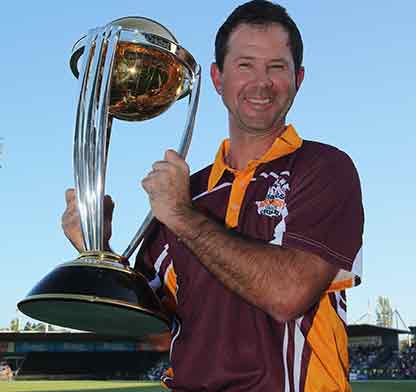 The audacious pulls, the rasping cover drives, garnished by the archetypal Aussie attitude. Ricky Ponting burst into the scene as a supremely talented teenager in the great cricketing nation and ended his days as one of the greatest batsman the world has ever seen.

He scored more runs than anyone in the history of the game bar Sachin Tendulkar, stacked up innumerable hundreds, and in spite of the tailing off during a long and rather ordinary home stretch of nearly 50 Tests, his final numbers read phenomenal. The huge scores were collected in every land and against every attack with the exception of India and their spinners, especially the ones who tweak with fingers.

Ponting sits firmly enthroned as one of the top batsmen of Australia, with only Don Bradman and perhaps Greg Chappell and Allan Border claiming a comparable rank.

While his early days were marred by disciplinary issues and alcohol problems, he overcame them with talent and tenacity to stamp his greatness in the landscape of the game. And then the story was of piling up runs in the most dominating of manners. And when his job with the willow was over, he could prowl the outfield like a panther, swooping down on travelling balls and sending returns homing in on bull’s-eye. Else, he could stand close to the wicket, pouching blinders and intimidating batsmen by his sheer presence.

Taking over the reins of captaincy from Steve Waugh, Ponting was blessed with a side amounting to a veritable roll call of greatness in all departments. However, hugely successful though his record as a skipper remains, there are gaps aplenty, especially against India and South Africa, and most importantly for the mindscape of the Aussie cricket follower, three rather dismal defeats in the Ashes. With the great names of the outfit walking into sunset, Ponting's job became more difficult and slowly chinks and crevices began to show. The sequence of poor results and his own plummeting numbers led him to step down, becoming the rarity of an ex-Australian captain in the side with Michael Clarke as the leader. However, all this did not stop him from remaining Australia's most successful captain ever.

Undisputably the best batsman of the world during the first half of the first decade of the century, Ponting scored incredibly during the period, culminating with eight hundreds in 2005-06. Backed by the likes of Ian Chappell to take over the mantle of highest runs and centuries in Test cricket from Sachin Tendulkar, he could not quite manage that as the Indian master went through an incredible second wind. But, his achievements with the willow nevertheless remain fantastic.

A force in One Day cricket as well with 30 centuries in the shorter version, Ponting was part of three World Cup winning sides (and four finals), leading Australia to tournament wins in 2003 and 2007. The spectacular hundred in the final of the 2003 edition remains one of the most memorable moments of a sublime career.