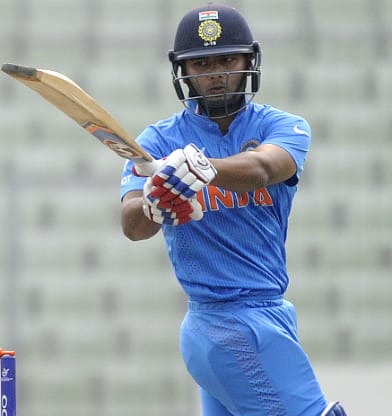 Rishabh Pant was an unknown entity until 2016. At 18, opening batting and donning the wicketkeeping gloves for India in the ICC Under-19 World Cup, Pant impressed with 267 runs at 44.50. On slow surfaces where run making was not very busy, Pant ended with a strike rate of 104. He slammed the fastest fifty in the tournament as well. In the information era Pant’s heroics were watched on television and followed on the web. An IPL contract landed at his door as Delhi Daredevils did not want to miss out on this exciting local talent. He fetched INR 1.9 crores, 19 times his base price of INR 10 lakhs.
Born in the holy city of Hardwar, the journey to fame was not as blessed for the youngster, who moved from one city to another in quest to make it big in the sport. From growing up in Roorkee, he moved to Delhi at 12 to seek Sonnet’s coach Tarak Sinha’s guidance. Sinha was the director of academies for the Rajasthan Cricket Association and asked his student to move there. He got some recognition in Rajasthan before he was ousted for being an outsider. Pant was back in Delhi and under the watchful eyes of Sinha took strides ahead. All is well that ends well.
Pant made his First-Class debut for Delhi against Bengal in 2015 in the match best remembered for the ugly spat between Gautam Gambhir and Manoj Tiwary spat. He opened the innings and struck a brisk 57 in the second innings.
A good U-19 World Cup and a promising start to IPL where he became the second-youngest to score a fifty (against Gujarat Lions, off 25 balls) had already enhanced his reputation, but the escalation point was his triple-hundred in the Ranji Trophy 2016-17. His 308 against Maharashtra came off 326 balls at iconic Wankhede Stadium. It did not end there, as he went on accumulating runs at breakneck pace, bringing up a hundred in 48 balls against Jharkhand — the fastest First-Class hundred by an Indian.
Pant, who idolises Adam Gilchrist and Virender Sehwag (no surprise) is banging on the national selector's doors and is already tipped as MS Dhoni’s successor.
Suvajit Mustafi