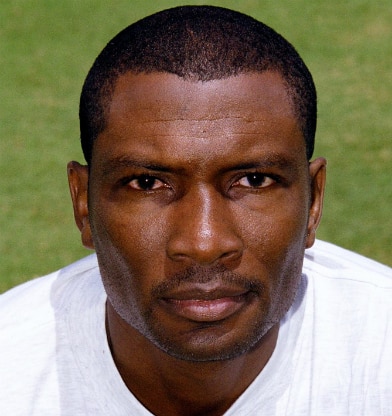 Bowling spin was not fashionable in West Indies cricket in the 1980s, but Roger Harper carved a niche of his own. He was very tall, ran in a rhythmic, angular motion, and leapt upwards at the last moment to stretch the release point to the maximum. As a result, though he rarely gave the ball a serious tweak, he could often extract bounce, and did so with infallible accuracy. He played the perfect foil to those lethal fast bowlers.

However, he was most famous for his fielding. Along with Gus Logie, Harper was probably the greatest fielder of the era. His run out of Graham Gooch off his own bowling at Lord’s remains a YouTube favourite for many: Gooch stepped out and hit one back to the bowler; Harper swooped down, picked up the ball, and knocked down the stumps at the other end in one fluid action, leaving Gooch crumpled on the floor. Scyld Berry went to the extent of insisting the dismissal went down as ‘st and b Harper’.

And then, there was that catch of Dean Jones, who tried to flick Curtly Ambrose. The ball took the leading edge, which meant that Harper did not have the time to respond before the ball actually passed him at slips, that too on his left, his wrong side. The ball was also dipping, which meant Harper had to go backwards, downwards, and to his left simultaneously; he did.

When Andy Roberts faded out and both Colin Croft and Sylvester Clarke left for South Africa, the selectors gave Harper an extended run in the early 1980s. Clive Lloyd defied conventional wisdom to pick Harper for all 5 Tests on the England tour of 1984: he responded with 13 wickets at 21. The high point came at Old Trafford, where he slammed a 53-ball 39 before having figures of 23-10-33-0 and 28.4-12-57-6.

When Michael Holding and Joel Garner faded as well, Harper’s biggest rival became batting all-rounder Carl Hooper. After playing 14 Tests in 16 months, Harper played only another 11 in eight years for no apparent reason.

However, he remained an asset in ODIs, his economy rate of 3.97 complimenting his spectacular fielding and aggressive batting. With 3.43 runs an over he was the most economic bowler in the 1987 World Cup. And in the 1996 World Cup he backed up Brian Lara’s assault with figures of 4 for 47, knocking South Africa out of the tournament. He finished the tournament with 12 wickets at 18 and an economy of 3.77.

At 33, he was axed without much reason. Even in his last match, against new world champions Sri Lanka, he took 3 for 34.