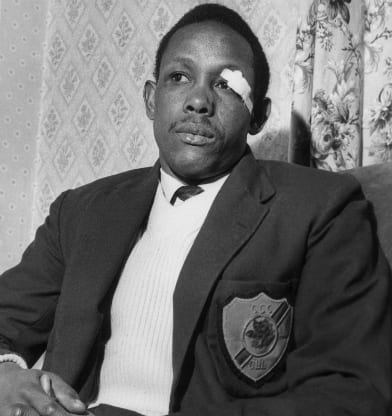 There is no way to find out whether Roy Gilchrist was the fastest bowler in history. What we do know, however, that he lost control over himself when he lost temper. He hated batsmen with a purpose; he did not hesitate to bowl bouncers, or even beamers aimed at the head; and he did not relent in club matches that were far from being battles from equals.
Gilchrist’s 57 Tests came at 27; his 167 First-Class wickets, at 26; and yet, his career was over at 26. Unlike Wes Hall, who later became his bowling partner, Gilchrist maintained terrifying pace despite bowling long spells under the sun.
The remarkable aspect of Gilchrist was his frame: at 5’8” he never had the build of a fast bowler. However, his fast run-up culminated in a high leap, and his exceptionally long hands resulted in a high-arm action; between them they made up for his lack of height.
Gilchrist failed on the disastrous 1957 tour of England. There is a rumour (probably false) that his first ball in Test cricket hit the sightscreen one-bounce and came back 30 yards. Both his pace and temper left an impact.
He did better against Pakistan in the home series that followed. This was the series where Hanif Mohammad grafted out his 970-minute 337, though that happened only after Gilchrist took 4 for 32 in the first innings.
He took 7 wickets at Port-of-Spain, but more significantly, he bowled a bouncer at Hanif that left the little man traumatised. Hanif claimed that the ball affected him even when he was in his eighties.
He tormented the Indians with hostile fast bowling, taking 26 wickets at 16.11. When India drew the Bombay Test, Gilchrist bowled almost throughout the final day. Unfortunately, things turned murky, for while Hall typically aimed for the wickets, Gilchrist almost certainly relished at the idea of hitting the batsmen.
Things became serious after Kripal Singh hit him for 3 fours at Madras and taunted Gilchrist. Despite repeated warnings from captain Gerry Alexander, a fuming Gilchrist ran in, bowled from 18 yards, and the bouncer knocked out Kripal’s turban.
In the final tour match against North Zone, Swaranjit Singh drove Gilchrist straight for four and had the stupidity to ask him “beautiful, wasn’t it?” Gilchrist hurled three beamers in four balls. At lunch Alexander asked him to leave for home. It did not help that Swaranjit and Alexander were friends at Cambridge. It is rumoured that Gilchrist had pulled a knife at Alexander.
Gilchrist was replaced mid-match and never played for West Indies again. Ironically, his First-Class career ended in India after he had a stint for Hyderabad.
He played for multiple sides in the Lancashire League. His League cricket record read 460 wickets at 11. The batsmen were no match for him.
Unfortunately, the temper persisted. He once uprooted a stump and hit a batsman on his head. Radcliffe once conceded a match to Crompton because they found Gilchrist too intimidating. He even carried his confrontations outside the ground.
He and his wife Lynn had seven children. The married ended when, after an argument, Gilchrist grabbed her throat, pushed her against a wall, and branded her face with a hot iron.
He died in 2001 after suffering from Parkinson’s. Reverend Wes Hall delivered the sermon at his funeral.
Abhishek Mukherjee