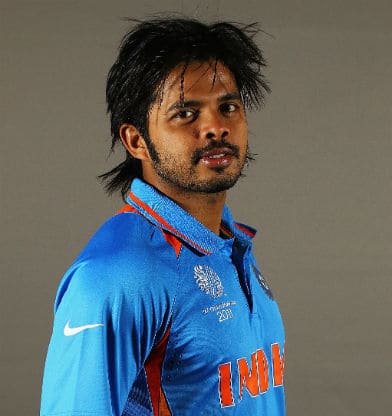 Old-timers gaped in unison when Sreesanth ripped through South Africa on Johannesburg morning in 2006-07. Bowling with an immaculately straight seam, he took 5 for 40, bowling out the hosts for 84. He added 3 for 59 in the second innings, thus finishing as the hero of India’s first Test win on South African soil.
He could be the next Kapil Dev, they said, for they had seen no Indian since the great man to obtain such prodigious swing. Six seasons later he had 5 for 116 at Cape Town. South Africa remained his favourite venue: he had 27 wickets from 6 Tests there, at 29.
Sreesanth is not express, but he makes up for that with new-ball movement and insatiable hostility. He had a terrific start to his Test career, with four-fors in his first 2 Tests, both against England on the unhelpful pitches of Nagpur and Mumbai.
Just like in Johannesburg, he played a crucial role in India’s win at Jamaica — a victory that ensured their first series win in West Indies in 35 years. He took 2 for 34 and 3 for 38 — including Chris Gayle for ducks in the first over of each innings.
Unfortunately, an economy rate of over 3.50 did not do him good. In ODIs he remains one of the few specialist bowlers with reasonably long careers who went over 6 an over. However, he could pick up wickets, as was evident when he took 6 for 55 in an ODI on a flat Indore wicket against England.
Originally a leg-spinner inspired by Anil Kumble, Sreesanth switched style. A product of MRF Pace Foundation, Sreesanth rose quickly through the ranks, spearheading the Kerala attack. In 2004-05 against Himachal Pradesh he became the first Kerala bowler to take a Ranji Trophy hat-trick.
But there was more to Sreesanth than that. No other cricketer would have danced after hitting Andre Nel (or anyone) for a six in a Test. When Australia were cruising in the 2007 World T20, semi-final, Sreesanth knocked Matthew Hayden’s off-stump out of the ground — and punched the pitch several times. There were many such examples. In fact, he announced in an interview with Herald Sun: “"Sreesanth’s way is to be aggressive. Sreesanth will always remain Sreesanth.”
While still on the World T20, it was Sreesanth who took the catch that sealed the tournament for India — thereby giving rise to the T20 boom in India, and elsewhere.
When IPL started, Sreesanth earned a contract for Kings XI Punjab. After they won a match against Mohali, Mumbai Indians captain Harbhajan Singh slapped Sreesanth, resulting in the latter breaking down. Harbhajan received bans in both IPL and international cricket — but Sreesanth never wanted to press charges.
In 2013 he, along with Rajasthan Royals (he had also played for Kochi Tuskers Kerala) teammates Ajay Chandila and Ankeet Chavan, were handed out life bans after being accused of spot fixing. He was acquitted in 2015.
He has acted in Malayalam movie Team 5 and is set to feature in upcoming Bollywood thriller Aksar 2. He has also participated in numerous television reality shows.
He joined BJP in 2016.
Abhishek Mukherjee