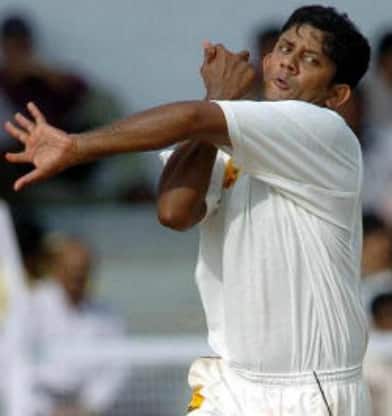 Sairaj Bahutule survived a close shave with death at 17 when the Maruti Gypsy he was sitting in hit a BEST van on Marine Drive, Bombay. Vivek, the boy at the wheel — and the son of singers Jagjit and Chitra Singh — never recovered; Bahutule went into a coma; he survived despite a fractured femur and a crushed elbow, as did another boy called Rahul Muzumdar.
Most would have given up hope to pursue a career in sports. He joined Frank Tyson’s camp (a part of the BCA-Mafatlal scheme) but he could not run for even 20 metres. But he still persisted.
In just over a year’s time he played Ranji Trophy. The fact that he played 188 matches was testimony to his immense mental strength. His 6,176 runs came at 32 and his 630 wickets at 26, excellent numbers by any standards. He was part of six Ranji Trophy-winning finals, one of them (2003-04) as captain.
Unfortunately, he was a contemporary of Anil Kumble, which meant that his international career was restricted to 2 Tests and 8 ODIs. It did not help that Narendra Hirwani eyed a comeback in the early 1990s. To make things worse, he took only 3 wickets in Test cricket and 2 in ODIs.
His standout performance came in the Irani Cup of 1997-98: Kumble took 4 for 140 and 7 for 33 in the match, but Bahutule eclipsed him with 5 for 79 and 8 for 71. He became the first to take 13 wickets in an Irani Cup match.
He got a short ODI stint but was dropped after a string of failures. He took a hat-trick against East Zone in 2000-01. When Steve Waugh’s all-conquering Australians came over the following winter, Bahutule almost bowled Mumbai to a victory with 4 for 38 (he got Michael Slater, Ricky Ponting, Adam Gilchrist, and Justin Langer): chasing 317, the Australians finished on 141 for 6.
He made his Test debut in the Chennai Test later that winter. He dismissed Mark Waugh and Langer, and scored a crucial first-innings 21. He was recalled for the third Test on the Sri Lanka tour later that year: he got an expensive wicket, and never played another Test. Harbhajan Singh had already established himself as India’s second spinner, and Murali Kartik was in the wings.
However, he continued to deliver for Mumbai. A dispute with MCA made him shift base to Maharashtra — the state his father Vasant had played for. He had his revenge, with 45*, 26, and 4 for 59 when Maharashtra toppled Mumbai at Wankhede in 2005-06.
He returned to Mumbai before playing for Assam, Andhra, and Vidarbha. He quit in 2013, and later coached Vidarbha.
Abhishek Mukherjee