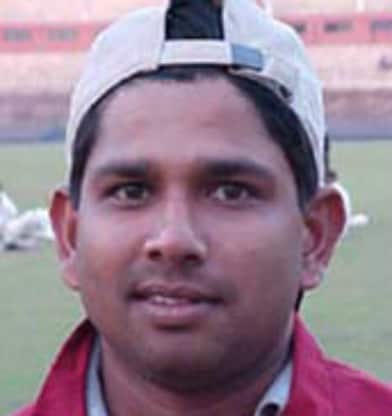 Sanjay Raul found his first break in India A’s 1997-98 tour of Pakistan. He scored hundreds against Peshawar and in an unofficial ‘Test’, and finished the tour with 287 runs at 96. He was selected after a splendid Ranji Trophy season where he aggregated 644 runs at 50 and 37 wickets at 21, topping both charts for Orissa.
His chance came later that year, when the Indian sent two equal teams, for Commonwealth Games and Sahara Cup. Raul was a part of the latter, thus becoming the second Orissa cricketer (after Debasis Mohanty the previous year) to play international cricket.
He played 2 ODIs, scoring a 13-ball 8 in one and a golden duck in the other. However, he dismissed Inzamam-ul-Haq on debut, caught at long-off.
A brilliant strokeplayer and cautious off-spinner, Raul scored 4,363 runs for Orissa at 45 and capturing 115 wickets at 27. He also led them in 31 of his 66 appearances, averaging 47 with bat and 23 with ball, and mentored Orissa champions like Mohanty, SS Das, and RR Parida. In all First-Class cricket, too, he had remarkable numbers of 41 and 29.
He is currently a Ranji Trophy match referee.
Abhishek Mukherjee