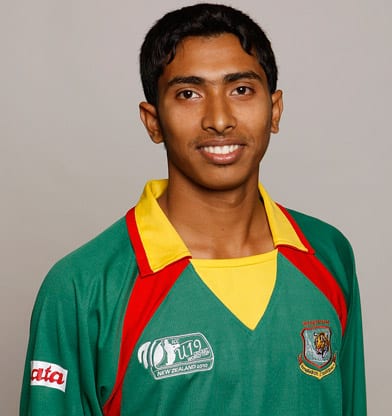 The son of a Bengali teacher in a government school, Sathkira-born Soumya Sarkar aspired to follow his father’s footsteps in path of education. However, it was his cricketing talent that took precedence and graduating up the ranks, Soumya established himself as a key member of the Bangladesh squad.  He is a product of BKSP — one of Bangladesh’s biggest sporting institutes. Hero-worship can do wonders and Soumya, who batted right-handed, switched to being a left-hander to match the grace of his idols Sourav Ganguly and Brian Lara.
The spotlight fell on Soumya for Mankading Australia’s Jimmy Peirson in the 2012 Under-19 World Cup. He eventually made his debut for Bangladesh in an ODI against Zimbabwe in December 2014. He grabbed limelight in Bangladesh’s 2015 World Cup campaign, where for the first time they qualified for the quarterfinal. He scored an attractive 51 against New Zealand at Hamilton, and also registered a record of claiming 4 catches — the joint-most — in a World Cup match.
Soumya’s rise to stardom was post the World Cup success, perhaps the happiest phase in Bangladesh cricket, where they beat Pakistan, India and South Africa at home. Soumya scored 497 runs in those 9 ODIs at 71, and they came at a strike rate of over 108. It was during these days his unique version of the late uppercut was christened as the ‘periscope shot’. He looked at ease against the pace and bounce of Morkels and Rabadas, and has impressive hand-eye co-ordination.
Soumya is also a handy medium-pacer whose strength lies in seam movement. This, however, remains an area with scope of improvement. Soumya does make batting look glamorous like his senior teammate Tamim Iqbal and can be equally destructive.
He played his part well with a fine 61 in first innings against Sri Lanka in the P Sara Oval of 2017. The win marked Bangladesh’s first overseas Test victory in a major nation. However, he will like to work harder on his consistency.
Suvajit Mustafi