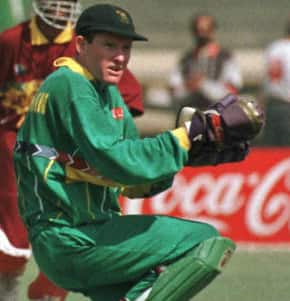 Few cricketers have epitomised the phrase “being at the right place at the right time” better than Steve Palframan. He made his debut in an ODI at Port Elizabeth after Dave Richardson broke a finger just over a fortnight before the 1996 World Cup.
By his own admission in an interview to SACricketMag, Palframan was watching the match live; he saw Richardson pick up the injury; and the replacement was announced minutes later. Palframan joined the pre-tournament camp immediately — a day after his second son was born.
Richardson did not recover before the tournament, and Palframan played throughout the World Cup — and never after that; Richardson had recovered by then; and by the time Richardson’s career approached an end, Mark Boucher had already arrived.
To be fair, Palframan was a sound wicketkeeper gifted with excellent reflexes. His batting was unorthodox, and Hansie Cronje used him as an opener for all but one of his matches. His finest match was the World Cup match against England, where he first scored 28 (half of his career runs, which amounted to 55) and took 3 crucial catches.
In the famous quarter-final against West Indies — the only time South Africa lost with Palframan in the side — he lasted a mere 2 balls.
At First-Class level, mostly for Border and Boland, Palframan scored 3,683 runs at 25 and effected 341 dismissals. Against Natal in 1994-95 he equalled the Border record of 9 dismissals in a match; and in 2002-03 against Border he had 8 dismissals, this time equalling the Boland record. He also holds the record for most dismissals for Boland.
Abhishek Mukherjee