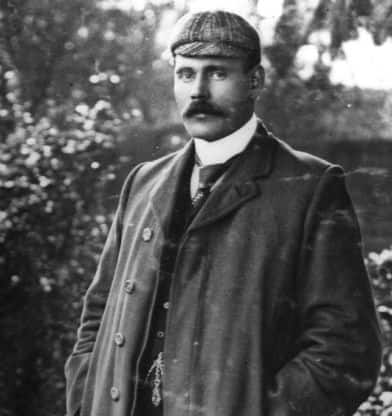 Not many dispute that Sydney Barnes was the greatest bowler that ever lived.

Taken to Australia by Archie MacLaren in 1901-02, Barnes picked 19 wickets in his first two Tests. In the next match he broke down with a knee injury and did not bowl any more on the tour, but his reputation had been made.

Following this, the career of Barnes followed an unusual path. During 1902 and 1903 he turned out for Lancashire, bowling his heart, soul and shoulders out. Yet, at the end of the 1903 season, he left the club after a dispute about winter employment. For the rest of his career, he played professional League cricket, turning out once in a while for Staffordshire and in the Minor Counties competition. Every league club that ever engaged his services won the competition.

Barnes bowled only in the famous 1902 Ashes, picking up 6 for 49 and 1 for 50. He did not play for England again till 1907. How many would he have got had he played? One can only conjecture in awe.

He returned to the Test fold in December 1907, in Australia. He picked up 24 wickets in Australia, 17 back in England in 1909 and 34 in the famous 1911-12 triumph alongside Frank Foster. The wickets in the last tour were captured even though he was often plagued in those days by bouts of rheumatism.

In the experimental triangular Test series that followed, Barnes picked up 39 wickets at 10.35.

Finally, in the 1913-14 series in South Africa, he captured 49 wickets at 10.93 apiece. It remains a world record after a century. It might have been significantly more, but Barnes did not play in the final Test at Port Elizabeth. The authorities were not willing to pay for his wife’s accommodation.

Throughout his playing days, he never compromised on the pay cheque for his labours; but he was too great a craftsman to compromise on quality even on purpose when embittered by financial disagreements.

Hence, the continuous sequence of surreal performances resulted in an ultimate tally of 189 wickets in 27 Tests at 16.43.

Of course, his genius went far beyond the international career. 14 years after he had played his last Test, Barnes turned up for Wales at the Llandudno Oval, at the age of 55, against the visiting West Indians and captured 12 for 118. A year later he took 10  for Wales and 9 for Minor Counties in two matches against the visiting South Africans. At 56, he was the fifth in the year’s bowling averages. In 1938 he was 65, beyond the retirement age in most jobs around the world — let alone active sports. That was his last season as a League professional and he scalped 126 wickets at 6.94.

Standing over six feet, broad of shoulders and deep of chest, with endless arms and sturdy legs, he had supposedly the perfect build for a bowler. He was never coached, and was by no means born into the game. Perhaps that is why Barnes became a self-made bowler, of a kind that is difficult to classify.

We can try to call him right-arm fast-medium — that indeed was his pace. But, the balls carried with them the accuracy, spin and resource of a slow bowler. He released from high and got uneasy lift from the pitch, rapping many a painful knuckle and making many of the worthiest batsmen hop.

He was reasonably quick, often compared to Alec Bedser in terms of pace. And then he had a faster ball — and, of course, a slower one, both cunningly concealed. He could also bowl yorkers with precision and venom. Yet, strangely he considered himself a spinner, for all the tricks were supposedly performed with his fingers. He moved the ball in the air, both ways and often late, but claimed never to have resorted tothe technique of bowling seam-up. Additionally, he could bowl both off-break and leg-break with the slight manoeuvring of the first and second fingers. When the occasion or the wicket demanded, he could be a slow bowler — and perhaps the most difficult in the world.

And finally there was hostility and stamina, laced with the strategic acumen for probing at the weakness of the batsman for hours, weaving a web of confusion with each ball, till the man was trapped and overcome.

His proud pursuit for the highest professional remuneration kept him from playing too many First-class matches. But, his overall collection of wickets remains eye-popping. Leslie Duckworth, in S. F. Barnes — Master Bowler, provided the break-up of his 6,229 wickets in all forms of the game, at an average of 8.33.