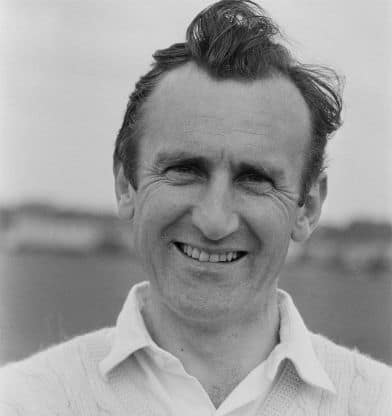 Few cricketers have tickled the fantasy of onlookers with their absolute nonchalance against fast bowling as did Ted Dexter. The balls came at him at furious speed — hurled by Wes Hall and Charlie Griffith, propelled across by Alan Davidson and Graham McKenzie. And Dexter stood tall, with feline grace and raw power, and drove them back, treating the bowling with a disdain it seldom deserved.

Who can forget the Lord’s Test of 1963 — one of the greatest ever played? With Hall and Griffith charging in, England lost John Edrich without a run on the board. Captain Dexter walked out to face the world’s most feared pair of bowlers bowling at their fastest. He proceeded to hook, cut and essay those thundering drives in a scintillating display of audacity. When Garry Sobers trapped him leg before, Dexter had raced to 70 from 75 balls, out of a total of 102.

Dexter often batted like the cavalier amateur of the old school, delighting the spectators and often bruising the hands of the fielders with his enormously powerful drives and cuts. Like the true romantic (what would you expect of a man born in Milan?) among batsmen he could often succumb to the bowling due to his absolute refusal to treat even the best with any semblance of respect. It was breath-taking, brilliant and could be frustrating.

However, he was no mere dasher. Five of his nine Test hundreds turned out to be over 150. The Australians took him seriously after he batted almost six hours at Edgbaston to save the Test with an impeccable 180. Later, as captain, he took 93 and 52 off them at MCG in the course of a memorable Test victory. Dexter could be superb against spin as well. He was perhaps the only English batsman to have mastered Derek Underwood.

He was a thinker too. Fred Trueman recalled that Dexter as captain had more theories than Charles Darwin. As captain of Sussex, Dexter adapted to the novelty of the one-day game with remarkable ease, establishing fielding positions that were original and effective. Perhaps Dexter had the biggest influence in the development of the modern game.
Yet, when things did not happen on the field, Dexter was known to get bored. He switched off, standing in the field, practicing his golf swings. He was a scratch golfer, and went on to write books about golfing techniques. Besides, he had a passion for speed — with motor bikes, jaguars, greyhounds and race horses. He used to carry a portable television, then a rare commodity in those days, to watch races in dressing rooms. Once he declared a Sussex innings from Brighton Racecourse.
Perhaps it was his impatience and lack of focus that kept him from becoming one of the best captains of England.
But, whenever one saw him in the field, batting with his sublime mix of grace and strength, bowling the often effective medium-paced swing, cutting off strokes at cover-point or merely standing there in his flannels, with his blue cap perched on his head, on the green field under the English sun, one could not help being charmed by the aristocratic bearing. No wonder he was named ‘Lord Ted’.

After retirement, Dexter worked as a journalist and formed his own Public Relations firm.. In 1970, he flew his own Aztec BPA-23 Pommies Progress to Australia to cover the Ashes series as a journalist.
In 1976, Dexter launched Testkill, an eminently forgettable cricket-crime novel co-authored with Clifford Makins.

In 1987, along with statisticians Gordon Vince and Rob Eastaway, Dexter was instrumental in developing a  ranking system for Test cricketers. It was launched as the Deloittes Ratings, and has now gained lasting prominence as the ICC player rankings. Dexter observed: “The rankings idea was my biggest contribution to cricket. Much better than being known for hitting a couple of extra-cover drives.”

Dexter served as the Chairman of Selectors for England from 1989 and brought forth some curious changes, but hardly any successful ones.

The shorter version of the biography in his website simply reads “International Sportsman and jolly good egg.” That is how the most charismatic of all cricketers would like to be remembered.