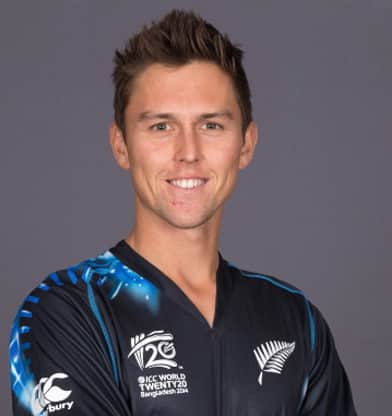 A left-arm swing bowler with reasonable pace, Trent Boult idolises Wasim Akram, and is on track to become a worthy successor. He can be vicious with the new ball, especially in conducive New Zealand conditions; and has formed one of the best new-ball pairs in the world with Tim Southee.

Boult and Southee, for that matter, go back a long way, as they started their journey together during the 2008 Under-19 World Cup. Boult finished that tournament with 11 wickets from 5 matches and was touted to become a future great. He made his Test debut in 2011 and captured 4 wickets in New Zealand’s historic win over Australia. The limited-over caps followed.

He returned a 10-wicket haul (including 6 for 40 in the second innings) in his second Test, against West Indies at Wellington in 2013-14 to follow his five-fors against England at Eden Park and Headingley. He soon became a regular feature in the Test side.

Boult finished as the highest wicket-taker along with Mitchell Starc in New Zealand’s dream run to the final of the 2015 World Cup. He picked up 22 wickets from 9 games and was a prime reason why New Zealand made that far in the global event.

Boult plays domestic cricket for Northern Districts like his elder brother Jono, an all-rounder who thrives in the shorter formats. He has also featured in the IPL, having played for Sunrisers Hyderabad in the 2015 and 2016 season and the Kolkata Knight Riders in IPL 2017.

He is also a prolific six-hitter.