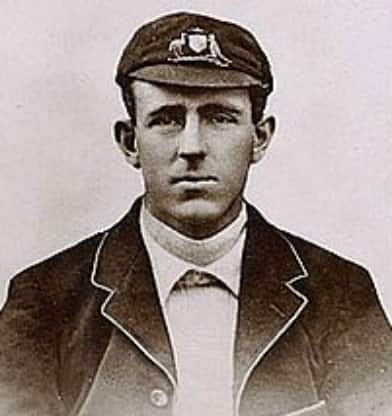 Perhaps the first graceful left-handed batsman, Ransford was described as ‘a Neil Harvey who came 40 years earlier… a man with an impatient streak of brilliance, one who could cut loose in a gale of run-getting.’
And at the age of 18, Ransford was considered good enough to represent Victoria, but his First-Class debut saw Wilfred Rhodes and Ted Arnold demolish the home side for 15 runs in the second innings.
However, in the following season, he underlined his credentials by scoring 152 against Queensland. And a few years later, at the age of 22, he made his Test debut.
His first Test century, at Lord’s during his first tour of England, was a superb 143, striking repeatedly through cover point, hitting as many as 21 boundaries. As a result he was pushed up the order to No. 3, and ended the victorious series with 353 runs at 58.83. Back in Australia, he was one of the main forces to blunt the Springbok charge, when, along with Clem Hill and Warren Bardsley he formed the left-handed brigade who could maul the battery of googly bowlers.
However, he was not really at his best in the home seasons of 1910-11 and 1911-12. When the England side arrived under Johnny Douglas, Ransford could not manage a fifty in the entire series, with Frank Foster and Syd Barnes troubling him throughout as the visitors triumphed 4-1.
Unfortunately, that was the end of the Test career of the Ransford. He was one of the Big Six who fell out with the Board before the Triangular Test Tournament of 1912. The others were Victor Trumper, Clem Hill, Sammy Carter, Tibby Cotter and Warwick Armstrong.
With the First World War forcing cricket into a distant back seat for the next few years, Ransford never played Test cricket for Australia again, although he scored quite a few in domestic cricket. He was just 26 when he played his last Test, remaining one of those unfortunate stories of what might have been.
Standing with a rather attractive crouched stance, Ransford looked deceptively relaxed at the crease. In fact, some remarked that he gave the impression of being about to take a nap. However, when the delivery was released, it was all grace and timing as he struck fluently through cover-point along with some strong leg-side strokes. He did not drive as much as a Bardsley or a Woolley, but his-cover drive was acknowledged as both brilliant and delectable.
In the field, he moved quickly in the deep and followed it up with fast accurate throws. Rarely was he asked to send down his orthodox left-arm slows, but he did once pick up 6 for 38 for Victoria against New Zealand at Basin Reserve.
In 1939, Ransford beat Don Bradman in the election for the post of the Secretary of the Melbourne Cricket Ground by the margin of one committeeman’s vote. He served as secretary till 1957.
Arunabha Sengupta