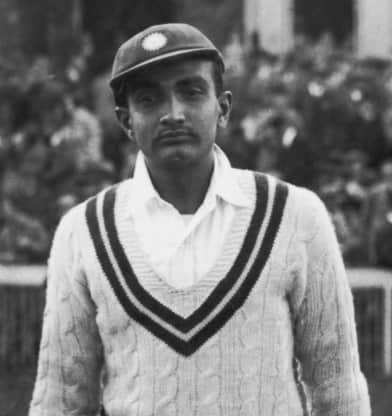 The first great batsman of India, Merchant played just 10 Tests across 18 long years and finished with a decent 859 runs at 47.72. It was, however, in First-Class cricket that he became Bradmanesque, rising to stratospheric levels only The Don could aspire to. His overall average stands at 71.64 for his 13,470 runs, putting him right next to the Australian’s 95.14. His figures for Bombay in Ranji Trophy would have made even the great man proud — 3,639 runs at a staggering 98.35.

There was another striking similarity. Like Bradman, Merchant played his entire Test cricket in two countries — at home and in England. In fact, Merchant’s career was even more lopsided — all his Tests were played against England.

He might have played in the inaugural Test match of India in 1932 had he not dropped out in protest because Mahatma Gandhi and many other freedom fighters were languishing in jail. He ultimately made his debut against Douglas Jardine's men in 1933-34 as a middle-order batsman. By the time he toured England in 1936, Merchant was acknowledged as one of the best batsmen of the country. By the end of the trip he was hailed as one of the best of the world.

His technique had been perfected — his footwork was exceptional, his drives crisp, his late cuts and leg-glances delicate, and his hook superlative. Due to lack of alternatives, he was pushed to open the innings where he stayed for the rest of his career. His exploits during the tour led CB Fry to exclaim, “Let us paint him white and take him with us to Australia as an opener.”

Merchant’s next Test appearance came 10 years later. But, the interim period was one of the most productive.  During the Second World War, Indian First-class seasons went on unabated, played mostly on flat batting tracks. In five of the six war-ravaged winters, Merchant’s batting averages read 114.00, 123.00, 233.00, 288.33 and 117.00.

When cricket resumed after the War, Merchant toured England again. The trip was another rousing success for the batsman, both on the ground and off it in social events. In the final Test at The Oval, he scored 128 before the Arsenal winger Denis Compton ran him out with a soccer style kick from mid-on.

Merchant was expected to lead India on their first tour to Australia in 1947-48, but withdrew due to poor health. He could not play against the West Indians either when they visited the following year. However, he was back in the side when the Englishmen toured in 1951-52. Past 40 by then, Merchant scored 154 in the first Test.  While fielding in the second innings, he attempted a diving stop and injured his shoulder. This effectively ended his career.

And he was as effusive about Merchant the man: “It is impossible not to like Vijay Merchant. His manners are polished to the last degree, his consideration for others impeccable, and he looks you in the face when he talks to you. His honesty is unmistakable; he speaks the truth, but never crudely.”

Merchant went on to become Chairman of Selectors for India, and played an instrumental role in the historic move of replacing Mansur Ali Pataudi as captain with Ajit Wadekar.