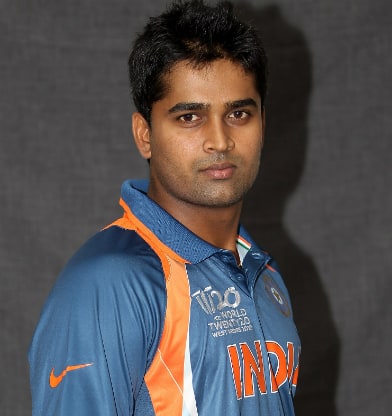 Feisty and aggressive, Vinay Kumar relies on relentless accuracy and subtle variations of line, length, and pace, punctuated by the occasional leg-cutter. He can swing the new ball, which makes up for his lack of pace at domestic level.
Unfortunately, that did not work for him in Test cricket. He played a solitary one, at Perth in 2012-13. To be fair, the pitch had nothing for him, and David Warner shredded his bowling to ribbons. His 13 overs went for 73; he bowled 6 of these to Warner, who smashed 43 off them. There was some consolation when he had Michael Hussey caught at gully, but that was it.
Limited-overs cricket was not much better, either. Economy rates around 6 in ODIs and 8 in T20Is are certainly not glorious. Against Australia at Chinnaswamy (his home ground) he went for 102 in 9 overs. He has not played for India since.
At domestic level it is a different story altogether. It is no joke for a medium-paced bowler to take over 400 First-Class wickets for under 25 on mostly unhelpful pitches. Over 2,500 runs have simply added to the value he brings to Karnataka cricket.
But Vinay Kumar’s greatest legacy lies in captaincy and mentorship. He led Karnataka to Ranji titles in 2013-14 and 2014-15, and then to the corresponding Irani Cups. Karnataka did the hat-trick in both seasons, bagging the Vijay Hazare Trophy as well. Never has Karnataka cricket scaled such heights.
Probably his greatest performance came in the final of 2013-14, where he took 5 for 34 and 2 for 43; sandwiched between them was an unbeaten 105. He became the second cricketer to score a hundred and take a five-for in a Ranji Trophy final: to make it even more dramatic, he achieved this on the birthday of Vijay Hazare, the other man to have done this.
Of his protégé seamers, Abhimanyu Mithun and Sreenath Aravind have both played for India. There has also been a cohort of batsmen, including Robin Uthappa, KL Rahul, Manish Pandey, and Karun Nair.
He has also played IPL for four franchises — Royal Challengers Bangalore, Kochi Tuskers Kerala, Kolkata Knight Riders, and Mumbai Indians.
Abhishek Mukherjee