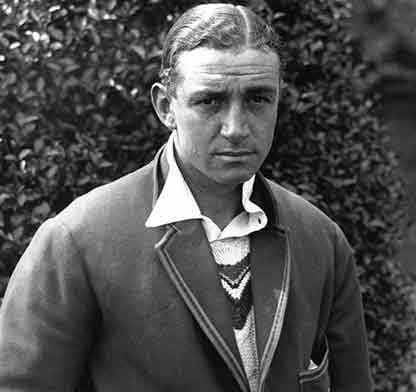 An appetite for runs and an eye for beauty. handsome of face, immaculate in his whites, debonair with the bat, languid in the covers, sublime in the slips, classical action with the ball.

And the most dapper of men off the field, with infinite charm reserved for the coquettish lass, a superb dancer eagerly sought as partner by the most desirable of women…

Wally Hammond did look the very image of the Boy’s Own Hero. “Of lovely athletic build, light as a ballet dancer on his feet, always beautifully balanced, the outstanding batsman between (the Wars). His game was based on driving and nobody was his peer when it came to the cover drive,” voiced his great rival Don Bradman. Robertson-Glasgow summed it up: “The effect on a match of his presence alone…the influence on a bowler’s feelings of the sight of Hammond taking guard at about 11:50 am, when lunch seemed far and the boundary near.”

In his youth, the crowd used to plead with the captain for Hammond to be placed in the covers, for greyhound like chases and speared in throws. As late as in 1983 EM Wellings wrote that there has been no better slip fielder than Hammond.

He also had the varied and in many ways rewarding experience of starting as a valued professional who later became an amateur and captained England with reasonable success.

Yet, this greatest England batsman of his generation was plagued by sadness all his life.  Hammond was taciturn, aloof and moody. During a 700-mile car journey across Australia, his only words to co-passenger Len Hutton had been, “Look out for a garage. We need some petrol.” This is one of the many examples of his lack of social skills and brooding, introverted nature.

Some say it had to do with mercury treatment for his life-threatening disease in the West Indies; some put it to the extraordinary dominance of world cricket by Bradman which stopped him from being recognised as the best batsman of the world after a very short period. Indeed, Hammond emerged as the best in 1928-29 while Bradman eclipsed him in 1930, and he never got the crown back. And that rankled for close to two decades. The tales of his bad blood with Bradman have achieved legendary proportions.

However, many among the spectators and the experts would rather watch an hour of Hammond's majestic batting, especially those grand drives through the covers, than a full day of Bradman.

Hammond’s final figures read 7,249 runs in 85 Tests at 58.45. The post-War Tests dimmed his lustre somewhat — he averaged 61.45 when cricket stopped in 1,939 — but only just. His medium-paced bowling, and occasional spinners, collected 83 wickets. With 110 catches he is still widely considered to be the best ever all-round fielder produced by England.

He was a complex, curious character, but one of the greatest and most graceful batsmen of all time, certainly the finest player through the off-side in the history of the game and one of the most delightful to watch.