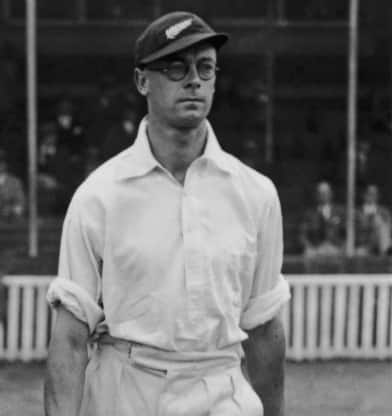 There have been several outstanding cricketers in the early days of New Zealand cricket, but few as significant as Walter Hadlee. He played only 11 Tests (and averaged a mere 30 with bat), but his role in New Zealand cricket stretched far beyond that.
Hadlee led New Zealand on the famous 1949 tour of England, among other matches. As an administrator, only a few have done more for New Zealand cricket. He also fathered Richard, the greatest cricketer in New Zealand history — as well as two other international cricketers, Barry and Dayle.
At the crease he was an extremely hard hitter, especially off front foot, through cover and mid-off. He could bat everywhere in the line-up. His 7,523 First-Class runs came at 40, while in club cricket he scored 15,391 runs (The Guardian referred to this tally as “a record”).
And yet he never really resembled a cricketer, let alone a Test captain. He was thin and wore horn-rimmed glasses, which made him look like an accountant. In fact, he was really a qualified chartered accountant.
And yet, Hadlee earned the respect of his teammates for several reasons: first, he was an exceptional talker; next, he was a very strict disciplinarian; and finally, he was a supreme strategist.
For example, Hadlee spotted Fijian legend IL Bula just before the tour. Hadlee wanted Bula on the England tour, for as per the laws, a cricketer was allowed to play for a country provided there was no First-Class cricket in his homeland. It did not materialise, but the plan was there.
The Nineteen Forty-Niners (that was what the 1949 squad was called) played 40 matches on the tour, of which 34 were given First-Class status. They won 15 (3 by an innings) and drew 24. For all you know, had they not lost the Oxford match they might have been known as Walter Hadlee’s Invincibles.
As for the 4 Tests, they reached positions where they could win each one. The series turned out to be a 0-0 draw, mostly because the Tests were all three-day affairs. Hadlee himself did not score a fifty in that series but his lowest score was 22.
In the tour matches he often threw away his wicket to give youngsters a chance (today’s batsmen have adopted this: they “retire out”). He helped groom the next batch of cricketers that would shape New Zealand cricket in the 1950s.
Bert Sutcliffe, the first great batsman in New Zealand history, did not hesitate in admitting after the tour: “After 1949 I felt I could have followed Hadlee round the world.”
His finest innings came at Old Trafford in 1937, when he came out at 105 for 4 after England had posted 358. He scored 93, and was dismissed only when he slipped on to the stumps. However, he made sure New Zealand reached 281. His only hundred (116) came at Christchurch in 1946-47.
His other famous innings came against the touring Australians the previous antipodean summer: he opened batting and was last out for 198, taking Otago to 347. The attack consisted of Ray Lindwall, Ian Johnson, and Bill O’Reilly.
Hadlee served New Zealand as national selector and manager. He had become a member of the Board of Control of New Zealand in 1950 (he was still playing Test cricket). He served them till 1984. This included roles as Chairman and President.
Also an activist, he was a part in the No-Maoris-No-Tour protest when the All Blacks toured South Africa without a coloured cricketer.
He was awarded a CBE in 1978. His autobiography The Innings of a Lifetime came out in 1993. And in 1995 he was inducted into the New Zealand Sports Hall of Fame.
He married Lilla Monro, whom teammate Mervyn Wallace had introduced to him on the boat to England in 1937. They would have five sons.
Walter Hadlee passed away of a stroke in 2006, at 91. The Chappell-Hadlee ODI series between Australia and New Zealand is named after the two most famous cricket dynasties of the countries.
Abhishek Mukherjee