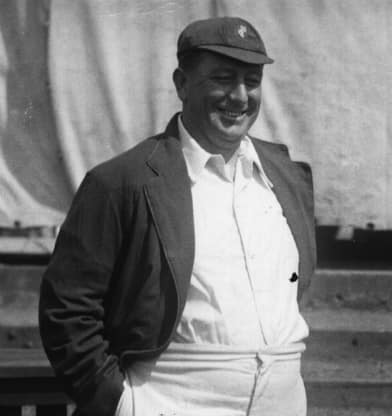 Colossal in his physical dimensions, Warwick Armstrong was as big in his stature (he reached up to 133 kg) in Australian cricket. He was gigantic enough to offer shade to small boys on hot days. Apart from that, he was one of the greatest all-rounders of his day.
He batted pugnaciously and bowled leg-spin with plenty of success, never allowing an easy run, often resorting to packed leg-side fields and pitching the ball outside leg. Besides, he was one of the most successful captains of the country. And all the while, he was almost always at loggerheads with the management.
Armstrong was one of the Big Six, the six cricketers who stood against the Board of Control and refused to tour England in 1912. The other luminaries in that half-dozen were Hanson Carter, Tibby Cotter, Vernon Ransford, Victor Trumper and Clem Hill. Armstrong was the only one among this illustrious half-dozen who could resume his career after the break and the Great War that followed.
In fact the years immediately following the Great War proved to be the most successful ones for Armstrong the captain and the Australian cricket team. England were routed in the two Ashes series, with Australia winning 8 and drawing 2 of the Tests, the 1920-21 home Ashes being the first ever 5-0 Ashes whitewash. The 1921 team that visited England under Armstrong remains one of the strongest ever.
There were also the idiosyncrasies, like bowling consecutive overs in an Ashes Test, bowled trial balls for fifteen minutes outside the pitch just after Frank Woolley had come out to bat, made a successful LBW appeal after an over was completed, and reading a newspaper during a match for he “wanted to see who we were playing”, though the last story was probably apocryphal.
In 50 Tests Armstrong scored 2,863 runs at 38.68 and captured 87 wickets at 33.59. His 23-year First-Class career saw him score 16,158 runs with 45 centuries at an average over 46 and capture 832 wickets at less than 20.
Arunabha Sengupta