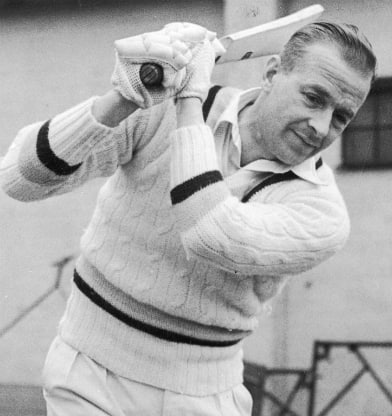 He had an unspectacular career. His 25,000 First-Class runs came at a shade below 40. His Test average, an ordinary 26, was certainly not enough to earn him a place in an England side of the 1950s — a decade when they were the strongest outfit in the world. However, there is little doubt that Willie Watson was the greatest footballer among Test cricketers. He was, after all, a part of England’s FIFA World Cup squad for 1950.

To be fair, he also had the misfortune of missing out on a chunk of his early cricket, for World War Two broke out the same year in which he made his First-Class cricket debut (he has also signed up for Huddersfield the previous winter as a wing-half); he was a superb fielder; and for a reasonable span of his career he was considered a better footballer than cricketer.

Watson scored 17 goals (one of them off a penalty) in 211 matches for Sunderland. There were also 11 appearances for Huddersfield Town and 33 more for Halifax Town, for whom he doubled up as manager.

His international debut was a relatively easy one, against Northern Ireland in 1949, a match England won 9-2. Two weeks later he was a part of the side that beat Italy 2-0. Despite being selected he did not play a match in next year’s World Cup, but played twice the following winter, against Wales and Yugoslavia.

He never played football for England again, but made his Test debut the following summer, and scored 2 fifties in his first 3 innings, against South Africa.

A middle-order left-handed batsman who could bat for hours without lifting an eyebrow, Watson’s first great innings came at Lord’s in 1953. Chasing 282 England were left reeling at 12 for 3 against Ray Lindwall and Bill Johnston. Trevor Bailey walked out at 73 for 4. They batted for four hours, adding 163, before Watson fell for a 346-minute 109. England saved the Test, and later, regained The Ashes.

However, Watson had his moments under the sun, scoring almost 14,000 runs for Yorkshire and another 8,000 for Leicestershire after he made a shift as player, captain, and assistant secretary.

After quitting both sports he worked as a Test selector. He had another stint with Halifax, and worked as Bradford City manager after that. He later moved to Johannesburg, where he worked as coach and administrator at The Wanderers.