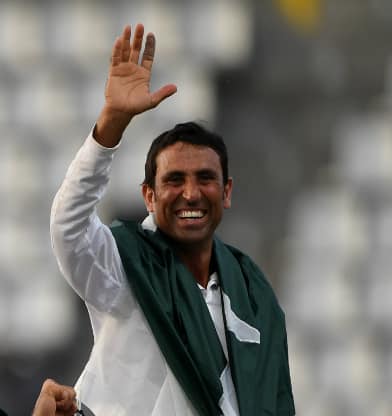 Few considered Younis Khan among the greatest batsmen in Pakistan cricket — not even after he became the first to score 9,000 Test runs for the country. That changed somewhat when he became the first to reach the five-figure mark — in his last Test series.
Determined, with an appetite for big scores (he has already scored the most hundreds for a Pakistani) and gifted with the ability to explode if the situation warrants, Younis was one of the finest — if not the finest — middle-order batsmen Pakistan has produced.
A powerful driver of the ball who never hesitated to go over the top, Younis was also an exquisite cutter and puller. He thrived under pressure, and had an exceptional fourth-innings record (1,465 runs at 50.51). In successful chases his 431 runs came at a mind-boggling 107.75.
Younis is the only cricketer to score Test hundreds in 11 countries. He has the most Test runs (10,099) and hundreds (34) for Pakistan. His conversion rate was superb (34 hundreds, 33 fifties); of all batsmen with more hundreds than fifties, Younis has the most Test hundreds.
Younis scored 107 on Test debut in 2000, and hundreds kept coming throughout his career. He hit his first major purple patch in 2005 and 2006 against India, a phase that included 267 and 84* at Chinnaswamy (that resulted in a rare Pakistani Test victory on Indian soil) and a run of 199, 83, and 194 at home.
His other epic, a gargantuan 760-minute 313, came after Sri Lanka piled up 644 for 7. The hundreds kept coming (he slammed two more double-hundreds), and finally reached what can perhaps be called his peak, in 2014, when he scored 1,064 runs at 66.50 with 5 hundreds. This included a streak of 106, 103*, 213, 46, and 100* in UAE. And in 2016 he scored a magnificent double-hundred at The Oval to help Pakistan level the series — and claim the mace for the No. 1 spot in ICC Test rankings.
The legacy of Younis, however, lies far, far deeper than that. Along with Misbah-ul-Haq, Younis kept Pakistan cricket afloat in an era when they did not host a Test for years and had to battle the gloom of spot-fixing at the same time.
To make things worse, Younis was hit by a string of personal tragedies in a short span of time: he lost his father and two elder brothers between 2005 and 2006, another elder brother in 2011, and a nephew in 2014. In between, he also had to witness the untimely demise of Bob Woolmer, whom he considered a father figure.
But Younis fought back, unperturbed, refusing to stop till he felt it was time to quit. Even in his last series he was as fit as anyone in the side, taking 10 catches (some of them quite spectacular) — setting a Pakistan record for most catches by an outfielder in a 3-Test series. His 139 catches remain a Pakistan record as well. He used to be an exceptional fielder in the bat-pad area in his early days and gradually migrated to slips as he grew in stature.
Also an inspirational leader, Younis had led Pakistan to the World T20 title in 2009. However, he showed reluctance to accept the post again in later days of his career.
He also held a dubious record — of conceding most runs in an over in Test cricket — when Craig McMillan carted him for 26.
Despite his excellent repertoire of shots, Younis’ ODI average hovered around the 31-run mark in a career spanning 265 matches. He did have his share of overseas T20 franchise contracts — for Yorkshire, Surrey, and a season for Rajasthan Royals.
Abhishek Mukherjee