Monterrey (Mexico): Britain’s Heather Watson will play Belgium’s Kirsten Flipkens in the final Abierto Monterrey Afirme tennis tournament. Watson on Saturday advanced to the final by beating France’s Caroline Garcia, the fifth seed, 6-1, 6-2 in the semi-finals, while Flipkens booked her spot in the championship match with a hard-fought 7-6 (8-6), 6-4 win over Estonia’s Anett Kontaveit, reports Efe. The 23-year-old Watson, who is ranked 84th in the world, has been on a tear in Monterrey, upsetting second-seeded Dane Caroline Wozniacki 7-5, 6-4 on Friday to reach the semi-finals. The British No. 2 broke Garcia five times in a dominating performance. The 30-year-old Flipkens took advantage of Kontaveit’s poor service game, attacking constantly and keeping the Estonian on the run. 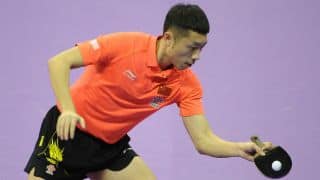