Serena Williams and Maria Sharapova have been on a quarter-final collision course all week following the release of the women's draw.

Melbourne: Serena Williams and Maria Sharapova will add another chapter to their fierce rivalry after both won through to the last eight of the Australian Open with straight sets here on Sunday. The pair, who have met in four Grand Slam finals over their storied careers, have been on a quarter-final collision course all week following the release of the women’s draw, reports Xinhua. On Sunday, neither Williams nor Sharapova fell at the final, fourth round hurdle and will now renew hostilities at the Rod Laver Arena in two days in a replay of last year’s final. Sharapova was the first of the decorated duo, who have won 26 Grand Slam titles between them, to hold up their end of the bargain. The Russian, who boasts five Slams, smashed a career-high 21 aces — complemented by a further 58 winners — in a sturdy fourth round test against Swiss teenager Belinda Bencic.

Under the roof of the Rod Laver Arena for the third time this tournament, the 2008 edition winner showed glimpses of both good and bad. The 28-year-old trailed twice in the first set against Bencic, a quarter-finalist at last year’s US Open but kept cracking winners among plenty of double faults (7) and unforced errors (46) before eking out a 7-5, 7-5 win. After the hard-earned win, Sharapova was asked about the prospect of facing Williams for the 21st time. “It was a great final last year against each other. I came quite close in that second set, but not close enough. I look forward to playing the best in the world, that’s what she’s proven last year and many years, and it will be a great match,” Sharapova said.

Not long after, Williams swiftly followed Sharapova’s lead. The World No.1 was at her dominant best, flattening Russian challenger Margarita Gasparyan in less than an hour. Williams eased past the little-known 21-year-old with a 6-2, 6-1 victory. The American only offered Australian onlookers a bland, uncompetitive entre ahead of what fans hope will prove to be a mouth-watering main course when Williams tackles Sharapova later in the week.

Williams reacted in playful shock when informed of her next opponent. “I had no idea (I was playing her),” she said sarcastically. “(Sharapova) had a really good match earlier today. I really have nothing to lose.” Later, Williams was asked to recall the first time she played Sharapova at Melbourne Park back in 2005, when she infamously recovered from a set and matchpoint down in the semi-final. “I just remember hitting an inside out forehand when I was down matchpoint. I remember hitting it as hard as I could. That’s all I remember,” Williams said.

Both of their career paths have been inextricably linked – for better in Williams’ case, and worse in Sharapova’s. Williams has not been beaten by Sharapova since 2004, and maintains a tremendously one-sided 18-2 win-loss record. More recently, the pair only played twice last year. Tuesday’s meeting will mark the third time in a row the two women’s greats will playoff in a Grand Slam event. 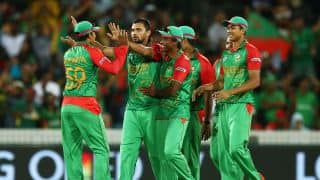 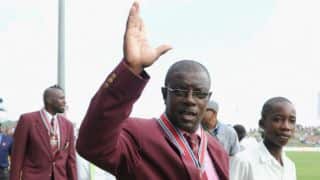