Melbourne: More players revealed match-fixing approaches as the Australian Open Grand Slam tournament came under close scrutiny following claims that corruption in tennis was widespread. Australia’s Thanasi Kokkinakis said he had been targeted through social media, while a British former Davis Cup player said he was once offered an envelope stuffed with cash to throw a match. According to Australian media, police are also monitoring the first round of the Australian Open, currently under way in Melbourne, for suspicious results. The latest developments come after the BBC and BuzzFeed, citing leaked documents, said 16 players who have reached the top 50 had repeatedly fallen under suspicion without facing action.

“More than half” of the players, who include singles and doubles Grand Slam champions, are at the Australian Open in Melbourne, according to BuzzFeed. The controversy is just the latest to hit the sports world after allegations of doping cover-ups rocked athletics and football body FIFA was engulfed by a string of corruption scandals. On Monday, Serbian world number one Novak Djokovic detailed a 200,000 match-fixing approach earlier in his career surrounding a tournament in St. Petersburg, Russia. Tennis authorities strongly denied covering up any match-fixing evidence, but they are likely to come under increasing pressure to act against what is a threat to the sport’s integrity.

In another indication that match-fixers are preying on tennis players, 19-year-old Kokkinakis, the world number 86, told Australia’s 3AW that he had been approached through Facebook. “Just these randoms [people] from nowhere saying ‘I’ll pay you this much money to tank a game’. I try and block it and get rid of that stuff and focus on what you need to do,” he said. Separately, Britain’s Arvind Parmar said he turned down a cash-stuffed envelope which was offered to him an hour before a match at a Challenger tournament in the Netherlands in 2004.

“I was offered an envelope full of euros to lose in two sets, only an hour before I was due on court,” Parmar, 37, told The Times. “I was approached by a random guy as I was coming off the practice courts. He showed me the money and said that I had to lose in two sets. He seemed anxious, nervous, and after a few quick words he began trying to press an envelope stuffed with euros into my hand. It was a substantial amount of money — tens of thousands — way more than I would have earned from winning the tournament and more than most players at that level would make in a year.”

An unnamed former tennis trader for a bookmaking company also told The Times that he suspected matches were fixed “on a regular basis, particularly towards the end of the season” because of irregular movements in the betting odds. Melbourne’s The Age newspaper said police, aware the BBC and BuzzFeed report was about to be released, had quizzed people within tennis about which first-round matches at the Australian Open might be at risk. The Australian Open’s first round, featuring 256 men’s and women’s singles players, concludes on Tuesday which is day two of the tournament at Melbourne Park. 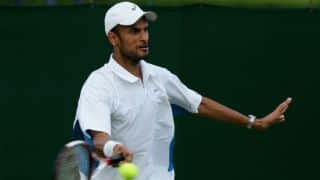