Indian tennis stars Leander Paes and Sania Mirza cruised into the mixed doubles pre-quarterfinals of the French Open 2016 along side their partners Martina Hingis and Ivan Dodig respectively.

Paris: Indian tennis stars Leander Paes and Sania Mirza cruised into the mixed doubles pre-quarterfinals of the French Open along with their respective partners today. While Paes and his Swiss Partner Martina Hingis, winners of three Grand Slam titles last season, beat German-Colombian pair of Anna-Lena Groenefeld and Robert Farah 6-4 6-4 in the opening round, second seeded Sania and Ivan Dodig of Croatia eased past French duo of Mathilde Johansson and Tristan Lamasine 6-4 6-3 in their opener later in the day.

However, it was curtains for another Indian Purav Raja, who, along with Ivo Karlovic of Croatia, crashed out in the opening round of the men’s doubles event. The duo lost 1-6 2-6 against ninth seeded Polish-Austrian pair of Lukasz Kubot and Alexander Peya. Earlier, in the mixed doubles match involving Paes and Hingis, both the two pairs were locked at 2-2 after breaking each other once. But Paes and Hingis broke again and held their own to nose ahead 4-2.

That lead stayed with Paes and Hingia as the two pairs managed to hold serve after that and the Indo-Swiss duo served out the opening set comfortably in the 10th game. In the second set, Paes and Hingis again broke early — in the third game — for a lead. They staved off two break chances in the eighth game to keep the advantage with them.

Groenefeld and Farah kept fighting hard and had two more opportunities to break their fancied rivals when they were serving for the match but Paes and Hingis had enough experience to save those points and finish the match in their favour. They next face winners of the other first round match between the fourth-seeded pair of Yaroslava Shvedova-Florin Mergea and Lucie Hradecka-Marcin Matkowski.

Sania and Dodig will next face the winner of the match between France’s Aliz Cornet and Jonathan Eysseric and British-Canadian pair of Johanna Konta and Daniel Nestor. 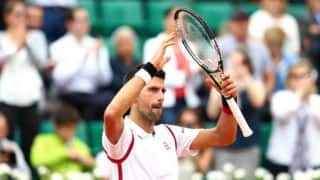