Garbiñe Muguruza got over her elimination from the Indian Wells championship against American Christina Mchale (5-7, 1-6).

Indian Wells: Spanish tennis player Garbiñe Muguruza got over her elimination from the Indian Wells championship against American Christina Mchale (5-7, 1-6), to focus on the upcoming Miami Open. 2016 has not started as Muguruza wished after the 22-year-old reached the final of last year’s Wimbledon and enhanced her international ranking among professional tennis players, reports Efe. Muguruza’s best result so far this year was reaching the quarter-finals of the Qatar Open in Doha, from which she was beaten by the German Andrea Petkovic.

The world No.4 was also knocked out of the first rounds of the Dubai Tennis Championships and the Brisbane International, and could not get passed round 32 at the Australian Open, the first Grand Slam championship of the season. Things didn’t chang for Muguruza in Indian Wells, despite her preparation on hard courts. Muguruza was close to tears as her coach Sam Sumyk tried to lift her spirits when she found herself three games down to Mchale in the second set of their second round match at Indian Wells. “I don’t want to play anymore. Do you think I’m going to fight being three games down in the second set”, the player asked Sam Sumyk. Despite the situation, she expressed satisfaction with her French coach. 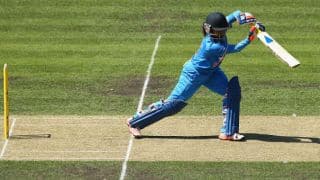