"I definitely stand for a change of format of the Davis Cup," said 12-time Grand Slam title winner Djokovic on Wednesday.

London: World number one Novak Djokovic called for a football-style Davis Cup to help keep the 116-year-old tournament alive. Djokovic inspired Serbia to its only Davis Cup triumph in 2010 but has, in common with many other top players, carefully selected which ties he will honour in a packed tour schedule. The 29-year-old is due to play in the quarter-final against Andy Murray’s Great Britain in Belgrade from July 15-17 in the week after Wimbledon. “I definitely stand for a change of format of the Davis Cup,” said 12-time Grand Slam title winner Djokovic on Wednesday.

“The format, as it is, doesn’t work anymore.” Djokovic wants the International Tennis Federation to rethink the schedule. He pointed to the success of football where the World Cup and European championships are organised in group stages and played at one specific time of the year. “Create one event in one year or two years that would be held over two weeks,” suggested the Serb.

“Make four groups, winners of all groups go to playoffs. Create it really attractive, not just for us tennis players, but for fans, for media, for everybody, for sponsors.” Djokovic played in this year’s first round win over Kazakhstan, taking part in three of the five rubbers over the weekend. He has played 23 ties since his 2004 debut but skipped the 2012 and 2014 seasons.

“Throughout the whole year, it’s a big challenge because of the schedule. You have four rounds in the best?case scenario of the World Group,” he added. “The best match in terms of schedule for a top player is the first one. Every match after that you need to play after either a Grand Slam or after a season finale. I think we do need to create a radical change because if we continue having this kind of format, it’s not going to be good for players.”

On Wednesday, Djokovic reached the third round of Wimbledon by brushing aide Adrian Mannarino, who was celebrating his 28th birthday, 6-4, 6-3, 7-6 (7/5). The top seed, bidding for a third consecutive title at the All England Club and fourth in all, will face either American 28th seed Sam Querrey or Thomaz Bellucci for a place in the last 16. It was Djokovic’s 30th successive win at Grand Slams, beating the modern day mark of Rod Laver and putting him just seven behind the all-time record of 37 of Don Budge set in 1938.

“The record that I managed to break today is one of the better ones because as a professional tennis player, you always aim to play your best in Grand Slams,” said Djokovic who holds all four Grand Slam titles. “Knowing that I won 30 in a row, it’s very pleasing. I want to keep on going. Let’s see where it takes me.” 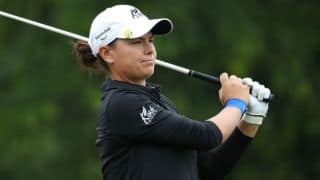