Novak Djokovic and Andy Murray secured easy win over their opponents to enter third round of Rome Open 2016.

Rome: Top-ranked Novak Djokovic produced a superior performance as he swept aside France’s Stephane Robert in straight-sets to progress through to the third round of the Italian Open in Rome. The 28-year-old Serbian secured a 7-5, 7-5 win over his French opponent in the second-round contest that lasted for one hour and 26 minutes. Djokovic will now play against Thomaz Bellucci of Brazil for the quarter-final berth. 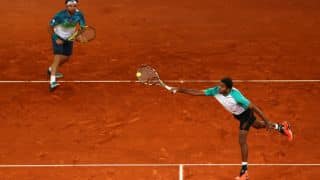