Though this story is a part of Dhoni s journey to becoming an India cricketer, it is also significant as it explains his first encounter with a future colleague and a close friend Yuvraj.

MS Dhoni: The Untold Story has finally opened to packed houses and plenty of positive reviews. Sushant Singh Rajput has done a terrific job in portraying MS Dhoni on screen and has been duly getting the rich praises from all quarters. Though Sushant and the entire cast has done an honest job in essaying Team India s most successful captain s story on the silver screen, there are a few loopholes too. Fans expected a lot of unknown stories from Dhoni s life. But what they have been dished out is only a few of them, while the majority of the movie being predictable. Here we bring to you one of the lesser-known stories.

Though this story is a part of Dhoni s journey to becoming an India cricketer, it is also significant as it explains his first encounter with a future colleague and a close friend Yuvraj Singh. Much before the two played for Team India together for the first time in 2004, their paths crossed in the year 1999. The occasion was the final of Cooch Behar Trophy 1999-00, a premier domestic tournament that is played at Under-19 level and unearths the young talent. So this final was being played between Yuvraj s Punjab and Dhoni s Bihar (Jharkhand, which later became an independent state and Dhoni s home team in domestic cricket, was then a part of Bihar).

Yuvraj, the captain of Punjab, lost the toss and had to marshal his troops to field first. This particular scene, where Dhoni s side is about to start their first innings in the four-day match, has been narrated nicely as it shows the Bihar coach ask his team to bat out the opposition. As it turns out, Bihar keep losing wickets at regular intervals and find themselves at 5 for 159, the stage where Dhoni walks out to bat. The wicketkeeper-batsman fires a quick 84, with 14 fours and 2 mighty blows and gets out to a leading edge that takes elevation and lands in the safe hands of the fielder at mid-wicket. His team eventually folds on a total of 357.

What shown next is Dhoni s curious friends trying to figure out what happened in the match as the cricketer returns back home and locks himself up at one of his friend s place, leaving him out. When two of his friends do manage to get him out and tell what happened in the final, Dhoni shares how he scored 84 in his team s 357 and the Punjab skipper hammered his side all over the park to register a score which was one more than Bihar s total 358. Yuvraj, played by Herry Tangri, hits a stroke-filled marathon knock of 404-ball 358, which has 40 hits to the fence and 6 beyond it. He bats out the hapless Bihar as his team goes on to post a mammoth 5 for 839 and pocket the Cooch Behar Trophy 1999-00 in the process.

Dhoni further explains to his friends how his side lost the match not on the field, but a day prior on the basketball court, when his side saw a star Yuvraj walk past them with full swagger. The southpaw had the earplugs on as he went past Bihar players without giving them a look and reached to his motorcycle to buzz off. His side, in awe of Yuvraj, perhaps surrendered the match to him there itself. Even Dhoni, to some extent, was in awe of Yuvi, as it could be seen when he was narrating the incident to his friends. As it happened, Dhoni missed out a spot in India s Under-19 team for the World Cup 2000 in Sri Lanka. Mohammad Kaif was named the skipper of that side which eventually won the title while Yuvraj was named the vice-captain. Both made it to the Indian team before Dhoni, who later played with the duo, especially Yuvraj, for a long time. 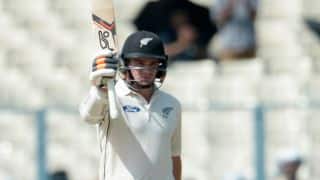