Chris Broad takes you on a tour of Trent Bridge cricket ground, meeting players and coach from the county. The surreal beauty of walking through the leafy woods, trees swaying in the breeze in an English cricket ground can leave you spellbound. Trent Bridge, which staged its first Test match back in 1899 is a microcosm of the hypnotic beauty of a typical English village cricket ground. With heavenly sentiments you glance at the Trent Bridge pavilion, as it has retained the quaint charms of yore. The Radcliffe Road Cricket Centre and Fox Stand have been hailed as the symbol of architectural brilliance.

The Trent Bridge ground has also seen many soulful performances that have filled ink in columns and newspapers worldwide. As England and India continue to play a game of cat and mouse in the ongoing first Test at Trent Bridge, let us look at some records and trivia associated with the ground.

Here are a few of the records and interesting facts.

On Day One, England spearhead, James Anderson became the first bowler in the history of Trent Bridge to take 50 Test wickets. He certainly has an enviable record at the ground.

The list of top wicket-takers at the ground reads:

Trent Bridge has been historically a seamer’s paradise, but Shane Warne has shown his class by performing brilliantly as well. Of course, Anderson now finds himself at the top of the tree.

Anderson, by taking 50 wickets became the second bowler to collect more than 50 scalps at two grounds. He has taken over 50 wickets at Trent Bridge and Lord’s. England’s ace all-rounder, Ian Botham is the only other one to have taken over fifty in two separate grounds — at The Oval and Lord’s.

Note: Just for the record, Alec Bedser (51 at Old Trafford), Fred Trueman (63 at Lord’s) and Stuart Broad (52 at Lord’s) are the others to have achieved the feat.

When Murali Vijay with dogged determination and unwavering confidence compiled a hundred on the first day, he became the 100th player to notch up a ton at the ground. The first one to score a century at the ground was Archie Maclaren back in 1905 against Australia.

Interestingly, since the dawn of the new century, India, who aren’t exactly known for playing well in seam/swing conditions is the only visiting team to have made over 400 runs and they have done it twice. Once in 2002, followed up by the Test played against England in 2007. They have a chance to make it on three occasions in the ongoing first Test match. 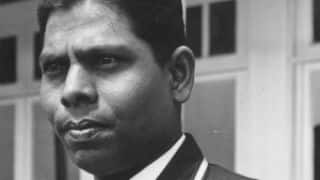