De Kock starred with a second straight half-century as South Africa chased down 135 with more than three overs left.

Quinton de Kock recorded back-to-back half-centuries to help South Africa complete a crushing nine-wicket win over India and level the series 1-1 at the Chinnaswamy stadium on Sunday. India were tied down to a modest 134/9 by some disciplined bowling from South Africa before their skipper dominated the chase and wiped off the target in 16.5 overs.

3rd T20I As it happened|Scorecard

In pursuit of a total way less than the average first-innings score of 180, South Africa were in hurry. De Kock drove the first ball of the innings through covers for a boundary off Washington Sundar, and although India manage to bowl four tight overs up front, the skipper hammered two identical sixes off Navdeep Saini to get South Africa going.

Reeza Hendricks was kept quiet initially before he took toll of the freebies by Deepak Chahar. Besides some wayward bowling, India were let down by some poor decision-making. A delivery from Chahar rapped Hendricks on the pads and was seemingly going way down leg perhaps hitting the seventh stump had there been one. But a baffling call to go upstairs wasted India’s only review. 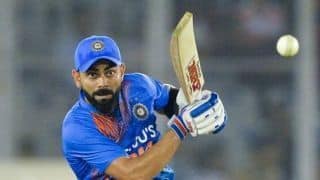