Australia include Shane Watson in squad for second Test match

A video of the Australian selectors announcing the squad for the second Test match against South Africa at Adelaide, starting November 22.

Star all-rounder Shane Watson has been included in Australia's squad for the second cricket Test against South Africa despite concerns over his fitness.

Watson, who missed the drawn first Test at the Gabba due to a calf strain, was included in the squad announced Friday. His replacement Rob Quiney has been retained in the side, PTI reported. 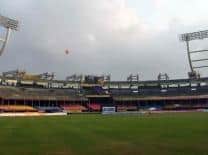