Australia are playing their cards close to their chest on Shane Watson‘s availability for the 3rd Test against South Africa. One of Alex Doolan or Shaun Marsh is expected to lose their place if the all-rounder comes back into the team.

According to news.com.au, the batting and bowling inadequacies that have surfaced during the Port Elizabeth Test loss, have placed the selectors in a quandary.

Apart from Chris Rogers (107) and David Warner (66), no other Australian batsman made more than six. Marsh and Doolan were first Test heroes, and had to be given an extended run to establish themselves as Test cricketers, but a Test later, it seems that all the bets are off.

Doolan played a second uncertain single-figure innings, and Marsh made a pair, giving him six ducks in his last 11 Test innings. 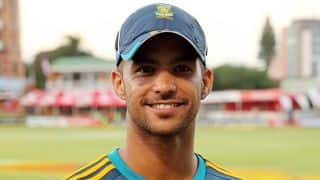