Skipper Michael Clarke and Ricky Ponting took Australia to a commanding 349 for four in the first innings at tea on the second day of the second cricket Test at the Sydney Cricket Ground (SCG).

Clarke was unbeaten on 170, his highest Test score, while Ponting fell shortly before the tea break after scoring a well crafted 134 that ended a two-year drought since his last Test century. Mike Hussey was giving Clarke company having scored eight.

Clarke notched up his 18th Test century in the final over of the opening session while the 37-year-old Ponting achieved the 40th century of his 160-match Test career and his sixth at the ground shortly after resumption.

Ponting was finally dismissed for 134, caught by Sachin Tendulkar at point off the new-ball from Ishant Sharma, after a 288-run partnership with Clarke that helped Australia recover from 37 for three. Their valuable stand took Australia to a position of strength to take a 2-0 lead in the four-Test series.

The only time Ponting came close to being dismissed during his 225-ball knock, studded with 14 fours, was when he scampered for a single to get his 100th run off Ishant. Zaheer Khan fielded cleanly but his well-directed throw missed the stumps and had it hit Ponting would have been more than a half-metre short of his ground.

But the cricketing gods were on Ponting' side and former Australian skipper picked himself up after the dive and with his shirtfront covered in dirt he raised his arms skywards to celebrate one of his most cherished centuries. It was a career-defining innings and will help Ponting retain his position in the Australian team until at least the end of the summer.

India failed to threaten the Australian batsmen and Clarke brought up his 50 on the first ball he faced this morning, clipping Zaheer off his pads to square leg to bring up his first half century of the series. (IANS) 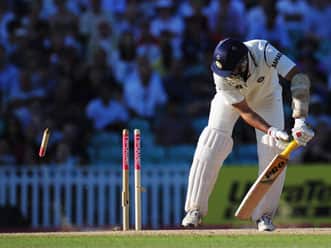