A video of the Australian opener David Warner hitting a massive six off the bowling of part-time bowler Faf du Plessis in the first session of the second Test match, at Adelaide on Day One.

Warner scored a century in the first session, eventually was dismissed for 119 runs by Morne Morkel. Earlier, skipper Michael Clarke, who won the toss elected to bat first in the second Test match. The hosts ended the first session with 102 runs on the board for the loss of three wickets.

The first Test match at the Gabba in Brisbane ended in a tame draw, with one full day of the match was washed out. 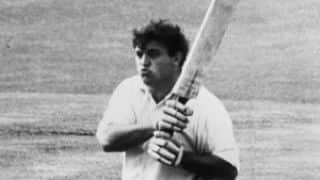 Colin Milburn slams 181 runs in a session at Brisbane