Pakistan chase a miracle at Lord's

Pakistan chase a miracle at Lord's

The Sarfaraz Ahmed-led side will need to defeat Bangladesh by at least 308 runs to make it to the semifinals.

Fact: the Pakistan cricket team needs a miracle at Lord’s on Saturday to enter the semi-finals of the ICC Cricket World Cup 2019. Fact: if Bangladesh win the toss and opt to bat, Pakistan are out of reckoning for the final four.

Also a fact: Sarfaraz Ahmed, the Pakistan captain, said that his team will attempt to score 500 and then try to beat Bangladesh by the required runs they have to win by to stay alive. (For reference, the smallest margin they have to target is 308 runs.)

Welcome to match 43 of the World Cup at the spiritual home of cricket, which certainly isn’t being viewed as a dead rubber by either Pakistan or Bangladesh.

How did it get to this? Pakistan have won eight and lost three of their eight matches, and took one point from a washout. Their net run-rate (NRR) is -0.792, worse than the fourth team on the World Cup points table, New Zealand, who have 0.175. England’s win over New Zealand in Durham on Wednesday has left Pakistan needing to beat Bangladesh by a near-impossible margin to boost their NRR by 0.98 to surpass New Zealand and take fourth place.

Mathematically, this mind-boggling situation leaves Sarfaraz and his team-mates and coaching staff in a funk. Sarfaraz, when pressed to answer as to why Pakistan are in this mess of a situation, rightfully singled out the loss to West Indies in their first match when they were dismissed for 105 and were beaten by seven wickets. 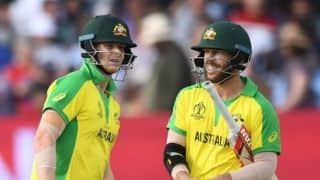