Robin Peterson managed a close escape and only a run came from that over.

In the end stages of a cricket match, it’s an asset for a captain if you have someone like Lasith Malinga in our armoury. Mahela Jayawardene of Sri Lanka was one such lucky skipper in the World Cup 2007, but in a crucial Super Eight match when the 45th over started in the South Africa innings, even he might not have thought that Sri Lanka had any chance to come back into the game.

When Malinga’s over began, South Africa were 200 for five in 44 overs, needing another 10 to win from 36 balls. Jacques Kallis was well settled at 85 and he had the able assistance of Shaun Pollock. Their innings had seen a collapse when from 160 for two, they crumbled to 182 for five but with 10 needed, they believed they were on course. Pollock managed six runs from the first four balls and South Africa were a boundary away from a win.

Four needed from 32 balls and with five wickets in hand, Malinga almost produced the impossible. He foxed Pollock with a slower ball, and then got Andrew Hall out caught with a slower yorker. Chaminda Vaas bowled a good 46th over, giving away only a run. When Malinga began the next over, all Proteas needed was three from 24 balls and Malinga was on a hat-trick. The first ball of that over produced the wicket of the big fish Kallis. Malinga had got his hat-trick but he didn’t stop there. The very next ball a yorker cleaned up Makhaya Ntini. He had picked up four of four. Now with a wicket in hand and three to get, South Africa stared at another ‘choke’.

Robin Peterson managed a close escape and only a run came from that over. The next over was a maiden bowled by Vaas and the in first ball of the 49th over, Malinga almost had the edge of Peterson to the wicketkeeper. The very next ball, Malinga found Peterson’s edge but a thick one that went past the slip for a four. 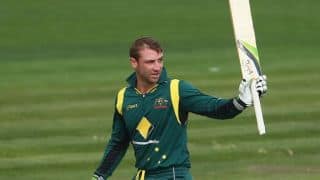