Semifinal obviously at the back of our heads but we'll focus on SL as of now: Dinesh Karthik

Semifinal obviously at the back of our heads but we'll focus on SL as of now: Dinesh Karthik

India will take on Dimuth Karunaratne-led Sri Lanka in their final game of the league stage.

India s only loss of the World Cup owed to this. England pulled things back drastically after breaking the 138-run partnership between Rohit Sharma and Virat Kohli to complete a 31-run win. India used the same tactic against Bangladesh, chipping away with wickets in the middle overs before Jasprit Bumrah closed out the match with consecutive wickets. ALSO READ: Against spirited Sri Lanka, India search best combination ahead of knockouts

For India, it might be a bit concerning that in all probability, they will again face England on Edgbaston, whose surface isn t the quickest by any means. Having said that, regardless of teams batting first and scoring over 300, Dinesh Karthikreiterated India are good chasers and that sides being unable to chase down challenging totals owe to a combination of factors.

I think it s a bit of both. The conditions obviously, when you re batting first, it s about seeing through the initial phase when the ball is new and then you have the ability to decide what the par score is and try and get there, Karthik said.

When you re batting I think the wicket changes a bit, becomes slightly slower, helps the spinners a little bit. For a lot of the teams, they re bowling cross-seam and the wicket has been a little up-and-down as well. It s not been that easy to execute shots. And also this is a World Cup, so obviously there s a bit of scoreboard pressure, and I think a lot of teams have fallen prey to that as well.

I think India is a team where there have been good chasers for a long time. I think we as a team believe that we re good chasers, because that s what we do day in, day out. And we re a team that actually has the ability to handle pressure very well. We d back ourselves to chase and get the totals that we believe we can achieve.

India, despite qualifying for the semi-finals have a few concerns of their own the biggest being their brittle and unsettled batting order which has caused a letdown in the final stages of the innings. Against Bangladesh, India began strongly, with Rohit Sharma continuing his sublime form scoring his fourth century of the tournament. At one stage, India were 180 without loss in 30 overs with the possibility of 400 lurking. But a flurry of wickets in the last few overs, led by Mustafizur Rahman finishing with a five-wicket-haul, kept India to 314/9.

It depends first thing on the conditions. And also it depends a little bit on how many batsmen you have behind you. I think you have more freedom to play shots when you have people who can obviously play until the end, Karthik pointed out.

If you feel that it s important that you stay if you need to be the player to stay to the end, then you delay the inevitable and then make sure that you take on the bowlers at the stage where you feel that there won t be any loss for the team. So, A, you need to play the conditions. And, B, obviously the skill sets of the bowler, and then you ve got to assess what the situation is and what your team needs and then react accordingly. 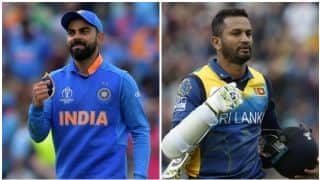