India brushed aside Sri Lanka in their final round-robin match to climb up to the top of the ICC Cricket World 2019 points table.

Cometh the hour, cometh the man. And when it is India against Sri Lanka, only one man dominates the headlines. On Saturday, it was no different at the Headingley Cricket Ground as Rohit Sharma hit a crisp 103 to help India thrash Sri Lanka by seven wickets in their final group game of the World Cup to finish with 15 points from 9 games.

Rohit now has six hundreds in the showpiece event and is sitting atop the list of most hundreds in World Cups with Sachin Tendulkar. The master blaster also has six World Cup hundreds. 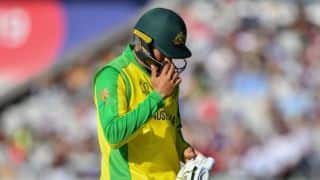