Carlos Brathwaite played an astonishing knock but that was not enough for West Indies to get over the line against New Zealand on Saturday.

New Zealand defeated West Indies by 5 runs in a World Cup round robin match here on Saturday. Asked to bat first, New Zealand posted 291/8 in their 50 overs. In reply, West Indies were all out for 286 in 49 overs.

Carlos Brathwaite was the top scorer for the West Indies with 101 runs off 82 balls. West Indies had suffered an early setback when in-from opener Shai Hope was bowled by a Trent Boult scorcher in the third over. Chris Gayle posted an uncharacteristically patient 87 off 84 balls while Shimron Hetmyer scored 54 off 45 as the Windies attempted a comeback. 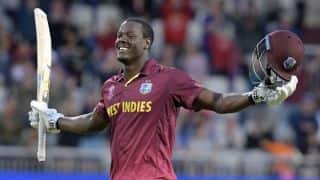