Australia coach, Darren Lehmann instead of apologising David Warner‘s reaction and verbal spat with Rohit Sharma, praised it and said that it was good on him to show an aggressive attitude and maintain it.

“David’s an aggressive character and we support that. It’s just making sure he does the right things on the ground, and he knows that more than most. We’ll work with him with that,” he said.

However, he also said that amidst of the aggressive nature he has shown, he must also not forget to respect the game and abide by the rules and laws it possess. “We’ve just got to be mindful of the game of cricket, it’s an important entertainment spectacle for people around the world. We’ve got to make sure we play hard but fair, and don’t cross the line,” he added. 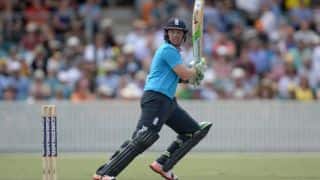